Posted on August 4, 2015 by jillbpearlman 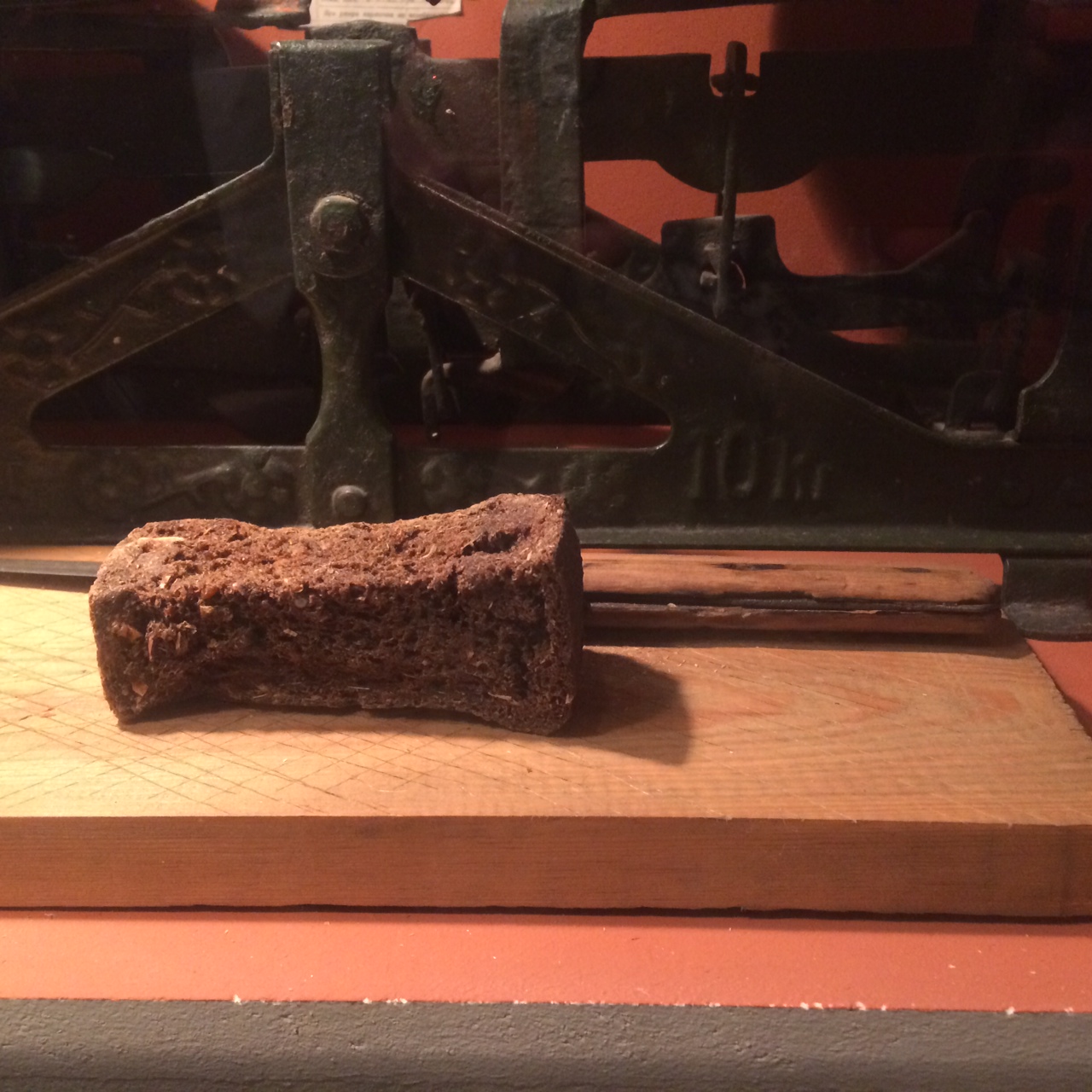 St. Petersburg is a stylized and showy city, immersed in the reflection of itself as “western.” It stares at itself in its canals, particularly now that it’s nearly a modern, post-Soviet, western city.  But absurdities were “baked into” the Soviet system.  The remaining remnants are richly comic.

For instance, what could be more basic than bread?  And wouldn’t a bakery be the place to buy it?   Gullible Westerners might read the visual cue of a little loaf hanging outside the door and make those assumptions.

Not so!  Says proud Petersburg, “Let them eat cake!”   Cake is one of several of Petersburg’s addictions, and inside, the display case are filled with endless examples.  Women wearing little elasticized caps will serve you as if they’re supplying the needs of the motherland.   They serve you layers of cream and dough, fruit, Napoleons, eclairs, frilly stuff.  And all day long, as if it’s Vienna or Germany, friends will be sitting eating their sweets.  But the only bread will be packaged and three days old, the same stuff you might buy in a 24-hour corner store that is a sad partner to the salmon, caviar, cheese you can buy at the markets.  It might be nasty, but boy, is it cheap!

Even the new crop of French-style bakeries don’t know a Napoleon from a baguette.  Crusty loaves were sitting in a lacquered basket on the counter, but the two cute girls looked at them  and giggled.  Trading gag lines, they guessed they were baked daily, but had no idea how much they cost – and a purchase without a receipt ticket, is simply not done.  No ticket, no sale, no bread.

The Museum of the Blockade.   Leningrad, as St. Petersburg was then called, was strangled by the German army for 900 days from 1941-1944.  It’s estimated that between 800,000 to a million people died from starvation, bitter cold and other privations.

In one display, there is a small slice of bread weighing125 grams.  That bread was the amount of food allotted to each person by the government each day.  The accounts in diaries and letters are incredibly painful – in child’s words, a boy dreams of the day he can eat potatoes.  Worse is the mother who writes about how they were forced to eat the family cat.  People ate flowers and they ate leather.  There is detailed advice about how to make jam from scrapings of glue from the woodwork that were spread on this horrid bread.

Strolling in the lush lanes of the Summer Gardens later in the day, I wondered how people hadn’t gone out and cut them down to build fires to warm their kids.  The trees are mute survivors and witnesses.  Not that people could have eaten the wood.  It wouldn’t have kept their kids from dying of starvation.

The story of the millions of Russian deaths is a trauma, as painful as witnessing as parts of the Holocaust.  The suffering of ordinary people, the crimes of society during war and as weapons of waging of war.  The mass starvation in Petersburg is a visceral indelible wound.   The bread of affliction – for some means of survival, for others road to their starvation – is as painful as the memory of bread gets. 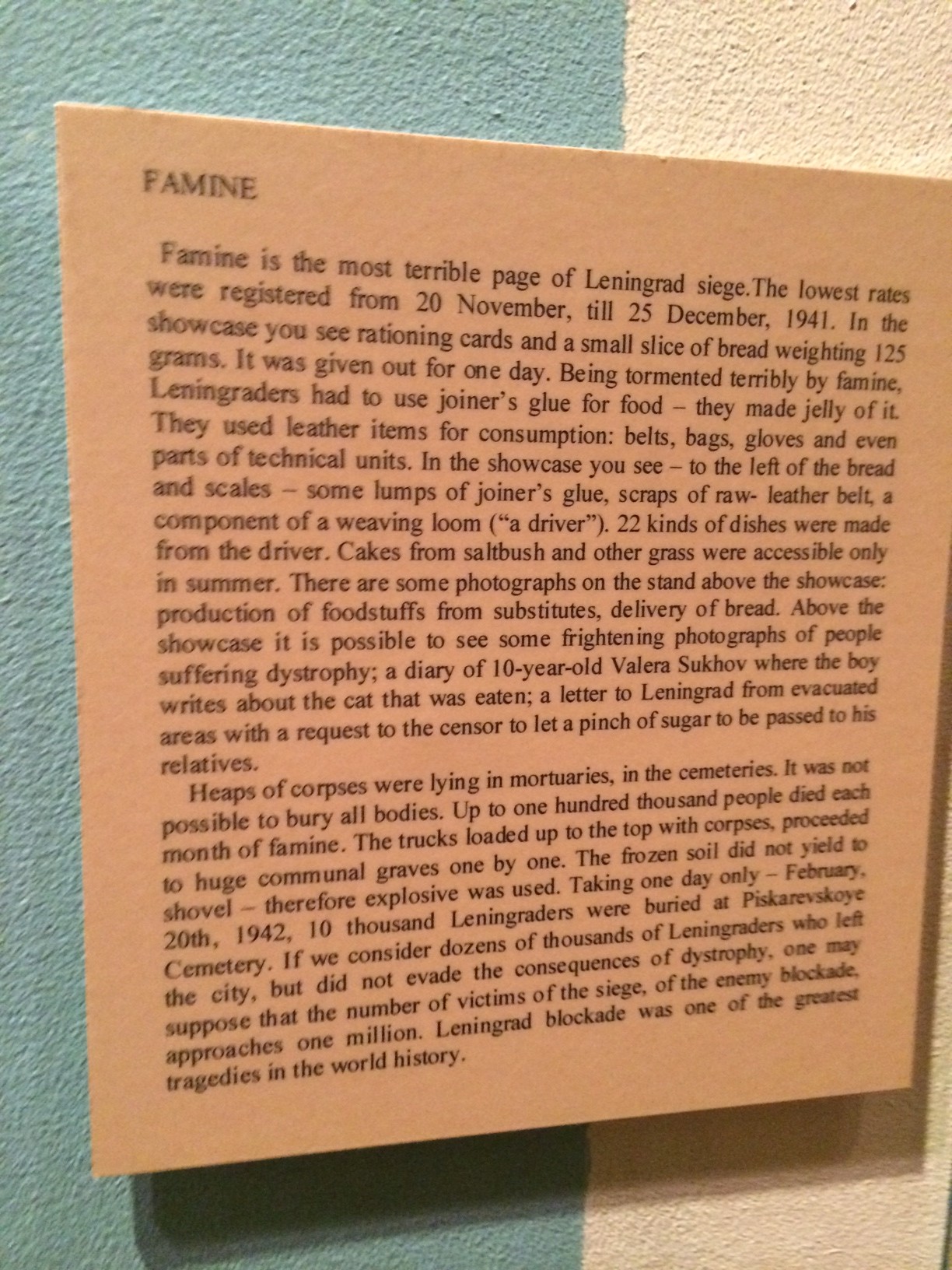