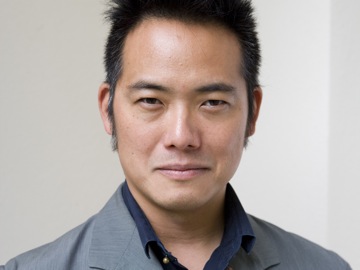 How to think about oneness: let us count the infinite ways

Give composer Ken Ueno five minutes and he can find a way to link Buddhism, Mongolian throat singing and Robert Kennedy. Give him another five and he’ll weave in molecular gastronomy and gang violence. Next he’ll add James Joyce and Ovid, the Roman writer. If his life takes this form of polyglottal all-inclusiveness, so does his art. If nothing is out of bounds, everything is drawn into his art.

What’s fascinating is that Ueno’s theme, when he comes to Providence later this month, is meditation. Traditionally meditation acknowledges our flurry of stimulating ideas, desires, ambitions, and asks us to narrow down, focus and ultimately empty the mind to achieve a state of unity and release. With Ueno’s energy, it might be challenging for him to calm his creative system. But the other part of the visionary meditative state is the realization that everything is connected, part of the One. And Ueno’s passion is definitely for making connections.

Ueno’s “Four Contemplations,” commissioned by Community MusicWorks and presented from March 26-29, will be total immersion into Ueno’s fascinating, floating world. The work will initially be set in the RISD Museum, where eleven classical players in Community MusicWork will perform in 30-minute segments while moving around the Asian galleries. Listeners will also be filtering in and out, music will bleed from one gallery to another. The vocals will be unlike any other: Ueno specializes in Tuvan throat singing and other radical vocal extentions.   Presiding over the world of difference will be RISD Museum’s treasure the Great Buddha who, due to renovation, was absent and is now returning to presence.

Known as a cross-disciplinary composer, Ueno’s jumping off point was the Dainichi Nyorai Buddha in state of bliss. His four segments correspond with the four main dharmas of meditation: contemplation on mindfulness, body, feelings, and thoughts. While not a practicing Buddhist like his father, Ueno’s extended vocal techniques require great discipline of breathing, which easily makes the connection with meditation.

Born to Japanese parents in the US, Ueno has lived in Japan, Switzerland, Brussels, Paris, Rome and Berlin.   He spent a year in Providence teaching at UMass Dartmouth and is now living in Berkeley. “I’ve been in exile my whole life,” he says.

This sense of the cosmopolitan ungroundedness is part of the impetus of his cosmopolitan creation. “Sometimes I feel both Japanese and American, sometimes neither. ‘Not belonging’ is my natural state. Art has helped me create a center, an autonomous sense of self. My art practice organically floats between architecture and sound and improvisation and written music and classical, experimental noise,” he says.

But how will CMW students approach throat singing, which stems from an ancient Mongolian tradition, and his soundscapes? Ueno, who is a professor of music at UC Berkeley, dislikes talking down to people of any age, race or class. He remembers how silly adults used to speak baby talk when he perfectly understood their words. He advocates that meaning in art, when authentically created, can be understood by any audience. Feeding people sweet Hollywood melodies guarantees they will only understand sweet Hollywood melodies.

Ueno cites an experience from his younger days while teaching in a halfway house for delinquent teenagers and former gang members. While Ueno gained respect, keeping the students’ attention was a trial. His moment of revelation came unexpectedly. One day he played a recording of “Quartet for the End of Time,” a notoriously difficult chamber music piece written by Oliver Messiaen. During those 6 1/2 minutes, the students were held in rapt attention. It was the only time the class was silent.  Once it ended, he told them that the music had been premiered in 1941 when Messiaen was a POW camp in Görlitz, Germany after being captured by the Nazis. The gangmembers had already grasped the essence of the shared experience, through their own months of incarceration. “If the music is good enough, it doesn’t matter how radical it is.   It can communicate to almost anyone.”

As challenging as his music might be, Ueno is a believer in its beauty and power. “If you work from an authentic point of view of something that affects you, part of honesty and earnestness that will translate. I write music I think is beautiful. It is weird, sure.   There are other things about sound, discovering sound, inventing technique that might be unusual.   The lesson is radical need not be uncomfortable.”

On Kareem Roustom’s “A Voice Exclaiming”

We are invited into a conversation in the dark. Velvet curtains are rich, rippling in midnight blue light. We’re sitting together in the hall, nearly six hundred of us. It’s not a dream, although parts of the concert will unfold with the unexpectedness of a dream, will provoke emotion and longing. There is a half moon of musicians behind the four members of Kronos Quartet – The CMW Players, Fellows and students filling out the semi-circle, waiting to perform Kareem Roustom’s “A Voice Exclaiming,” a commission by Community MusicWorks and FirstWorks, three years in the making.

From David Harrington’s first bow stroke, we know that Roustom will get the Kronos treatment: Urgency. Urgency of necessary response, of risk, of questioning the world. And these questions will reverberate to the audience in the way that great art makes us question ourselves and our basic preconceptions.

From the beginning of the first movement, I wonder: What am I hearing? The familiar opening of a Western concert piece? But I’m also hearing Arabic rhythms that recall traditional classic orchestras, simple songs. Arabic basics that might be heard in a taxi or cafe in Egypt, in Tunisia, in Syria.

As in other Kronos pieces, I grasp onto a rhythm. But then, the rhythm is broken off. It is repeated when I don’t expect it. The cells of the song keep bouncing around. Where is home? Do we know? The classical Arabic phrase that was started and interrupted reappears on the other side of the stage, played by CMW students suddenly under a spotlight. The spotlight had been on them, only we weren’t looking at them. Suddenly we’re looking at the kids. A cellist, a violinist, these young students are adding their voices to the music along with these seasoned and charismatic professionals.

We smile. We are taken in. There is a drama. Where will it surface next, in what form? Shapeshifting is a way of not being fixed on one immovable idea.

The melody played by Hank Dutt’s viola in the second movement is unbearably moving. It is from the Easter ceremony of the Eastern Orthodox Church. It is langourous, reminding us that the human voice with its slurs and scales is the most powerful voice of all. But it reminds me of a lament I heard half an hour before, in the cello of Sunny Yang playing “Sim Sholom.” It was a Jewish lament sung on the most solemn day of the Jewish calendar, Yom Kippur. Christian Orthodox, Jews. Cries from the heart sound remarkably similar!

Following the spotlight, I look at David Harrington. Judging from his body language, he’s crossed borders too. At the beginning of the concert, he was a tight ball of rock-star anxiety (“Aheym”). He was pure energy that left his bow in tatters (“…hold me, neighbor, in this storm…”). He is now sensual, making figure eights with his neck, his eyes closed. His violin’s voicing is ethereal, just a whisper.

Elegy, the tone of the piece has been set. We have entered deep into the shadows of sorrow for the deaths of victims in Syria, in war and abuse. Or it has entered us. As the orchestra moves into the celebration of the final movement, Dabkè, (Line Dance), elegy is not forgotten but the pace picks up. The dance is delicate, and the voice of student players is heard.

Suddenly, Harrington raises his hand in invitation – cellists trot out to the front of the stage and begin to play! They are eye-level with us, playing a piece of a composer sitting in the audience. Harrington makes another gesture: Let there be more! Kids are hovering at the top of the stairs like cherubim, a heavenly choir. As if descending from clouds, they slowly go from darkness into light. The drama, the surprise of the young generation stirs a range of competing emotions. From delight to sorrow in the presence of beauty to hope, I asked myself: Where am I? Church? Art space? Western concert hall? That was such a wonderful moment of disorientation. It was full of questioning. But even more important than the questioning was the mysterious dissolving of questioning. The questions all folded together, contradictions melted, fusing into the moment. The moment lingered, the moment was IT.

Providence-based writer Jill Pearlman worked in music journalism in New York for over a decade. She’s currently tapping some of her experiences for her novel, Clio’s Mobile Home.