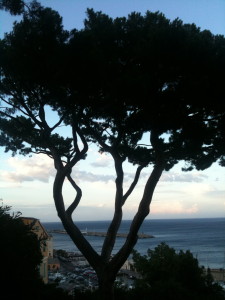 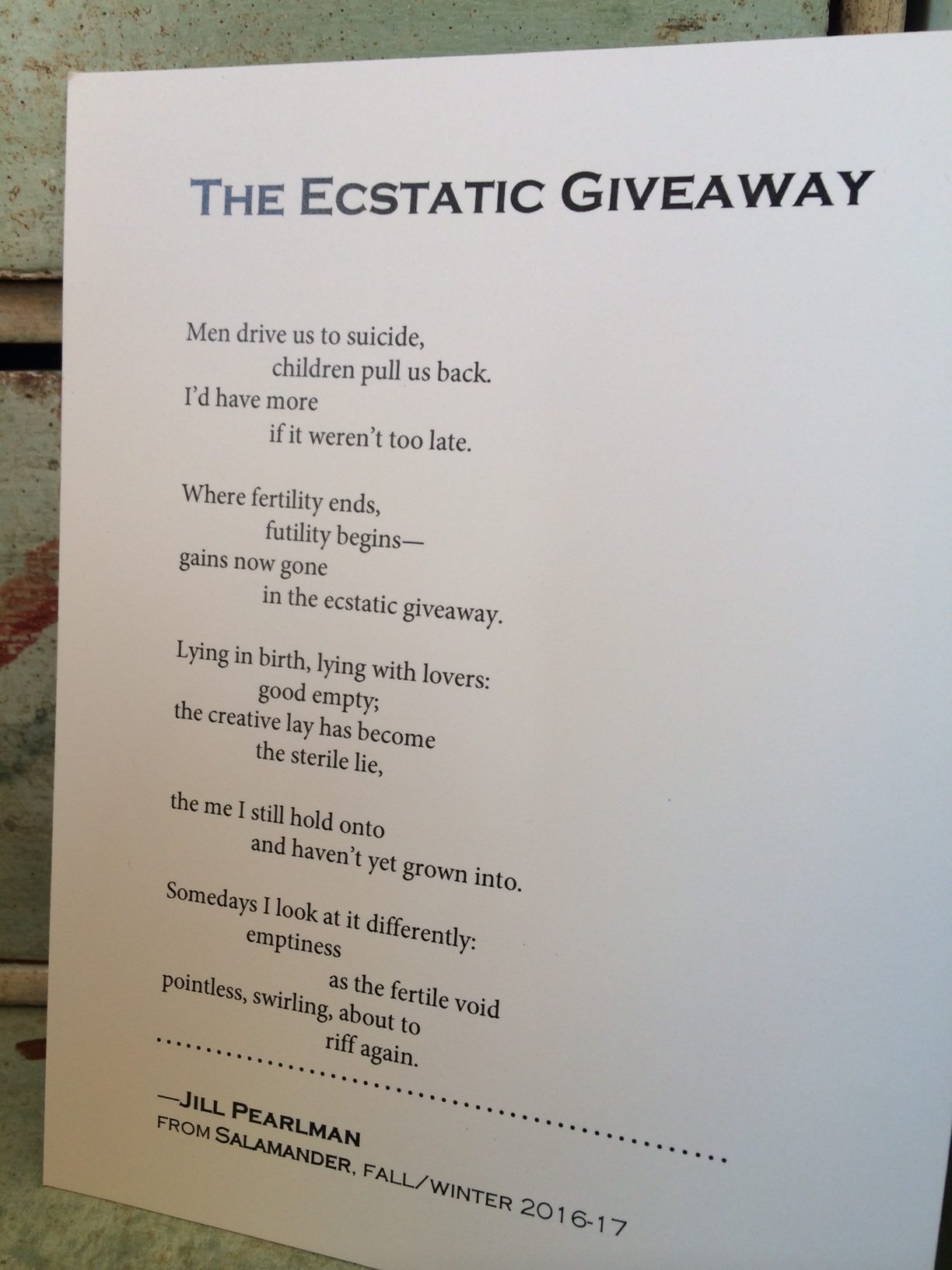 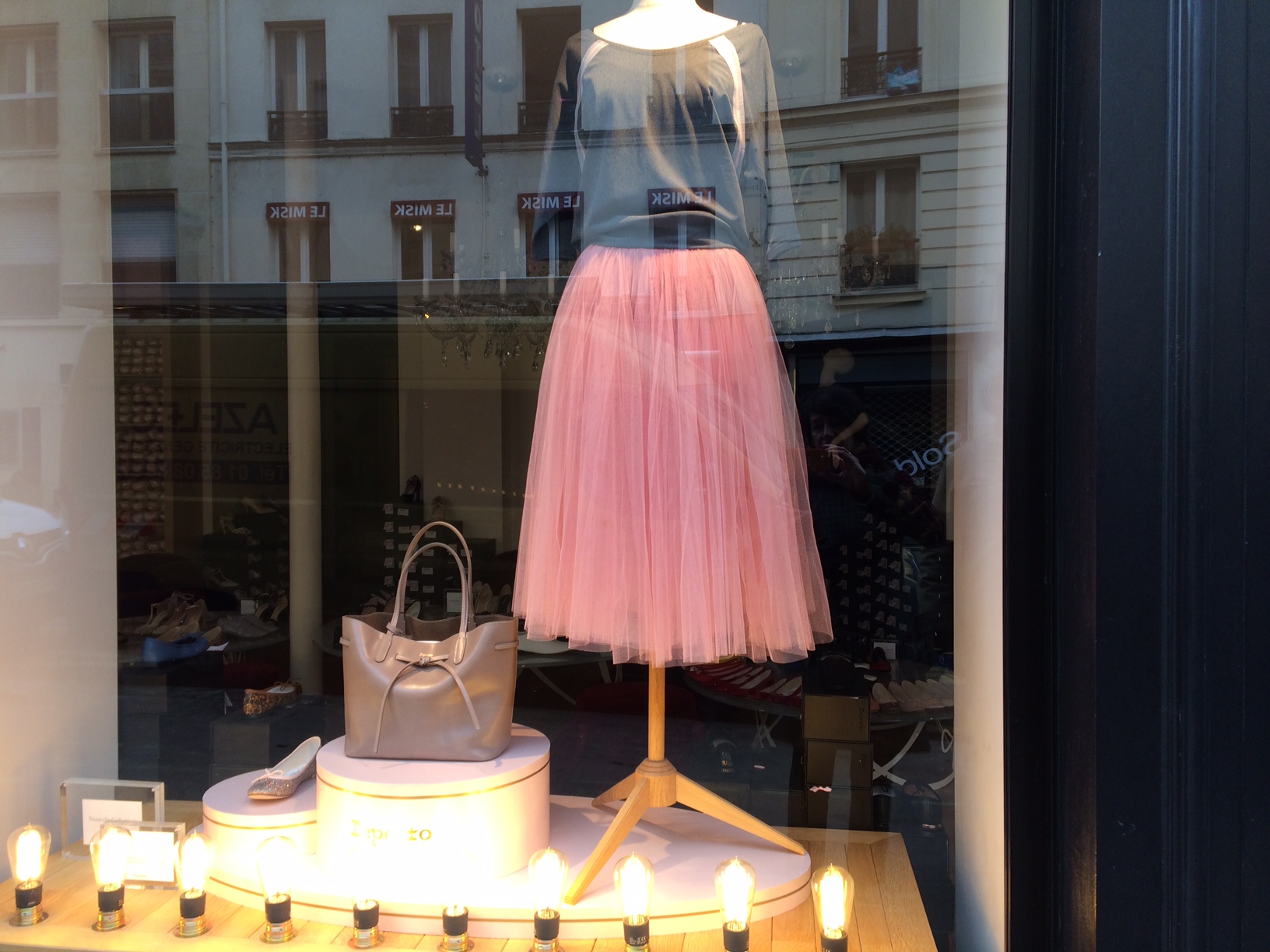 my girl burst in the door
fresh from the mall,
face aglow. She couldn’t

wait to show it – the tiny
little thing of lace,
strapless, backless

with a tulle, tutu skirt
all pale and blushing
like a rose.

Who am I to tamp down
anyone’s ecstasy – but really?
The lace we were watching

had piled up to ten inches
wrapping cars and ground;
and that path I’d shoveled…

a whisper tucked in its bluster. 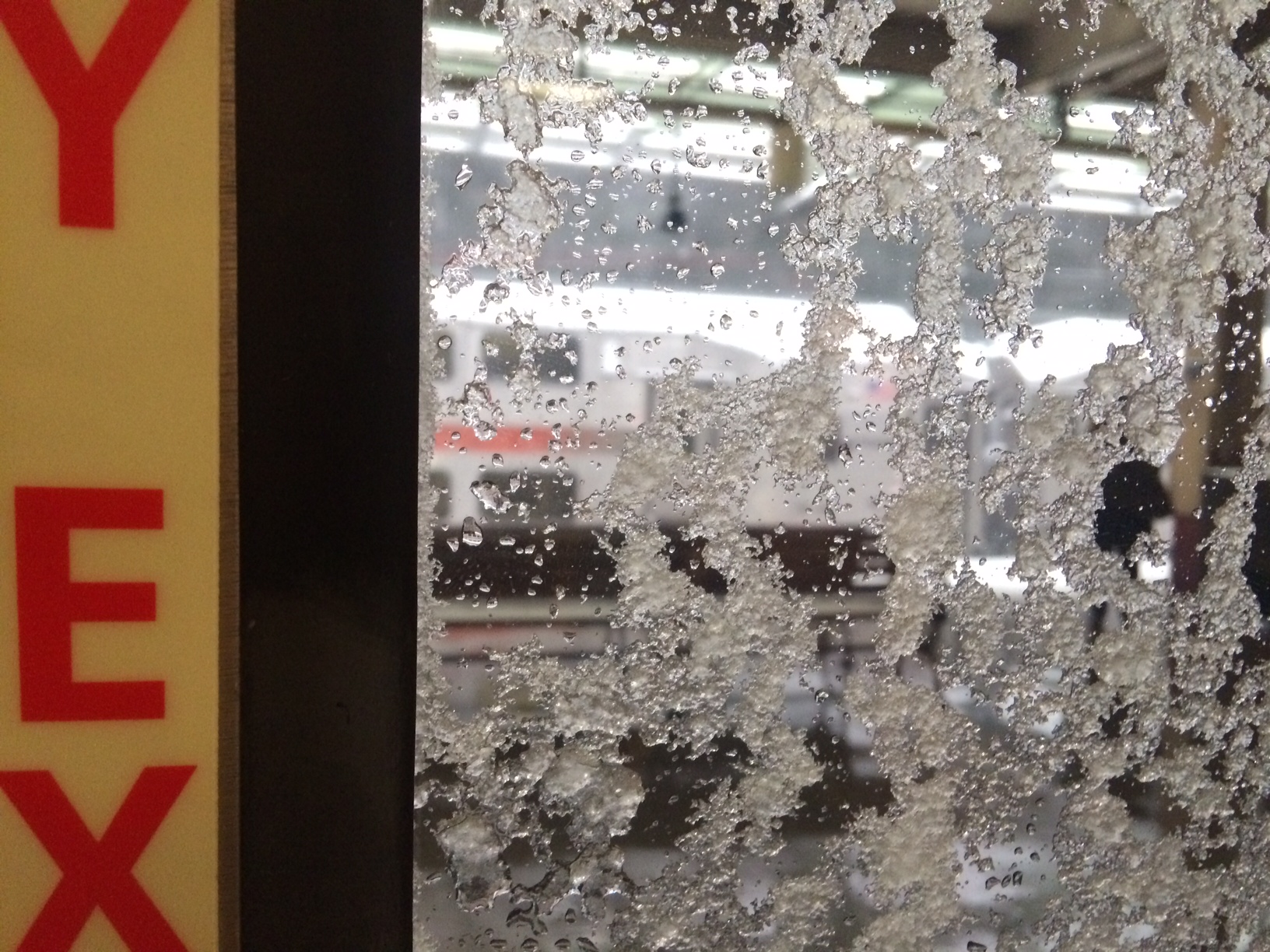 The snow is slicing at itself at three angles, like three samurai. Fascinated, the train conductor stops to watch.

A sickly green light, absinthe tint, is stuck in the globe of a streetlight.

A white lacquered ladder leans against a milk factory, in the corner.

In our all-white winter circus, trapeze artists will walk on lines of charcoal.

The winter day, shiny as a tin can

Medicinal, flat on the tongue

Needlepoint of snow in the streetlight
cross stitches in the gusting wind.

Cars begin to disappear, the nearby elms
fade in the distance.

By the shore, four sharks roll up,
bone dead, though a dog learns
to amuse himself with a hill and a sled.

Warm inside, a fire rages like twin sisters,
one blond tresses, the other red-headed.

The fire in the fireplace begins to die.
“I’ll always love you!” shouts the child. 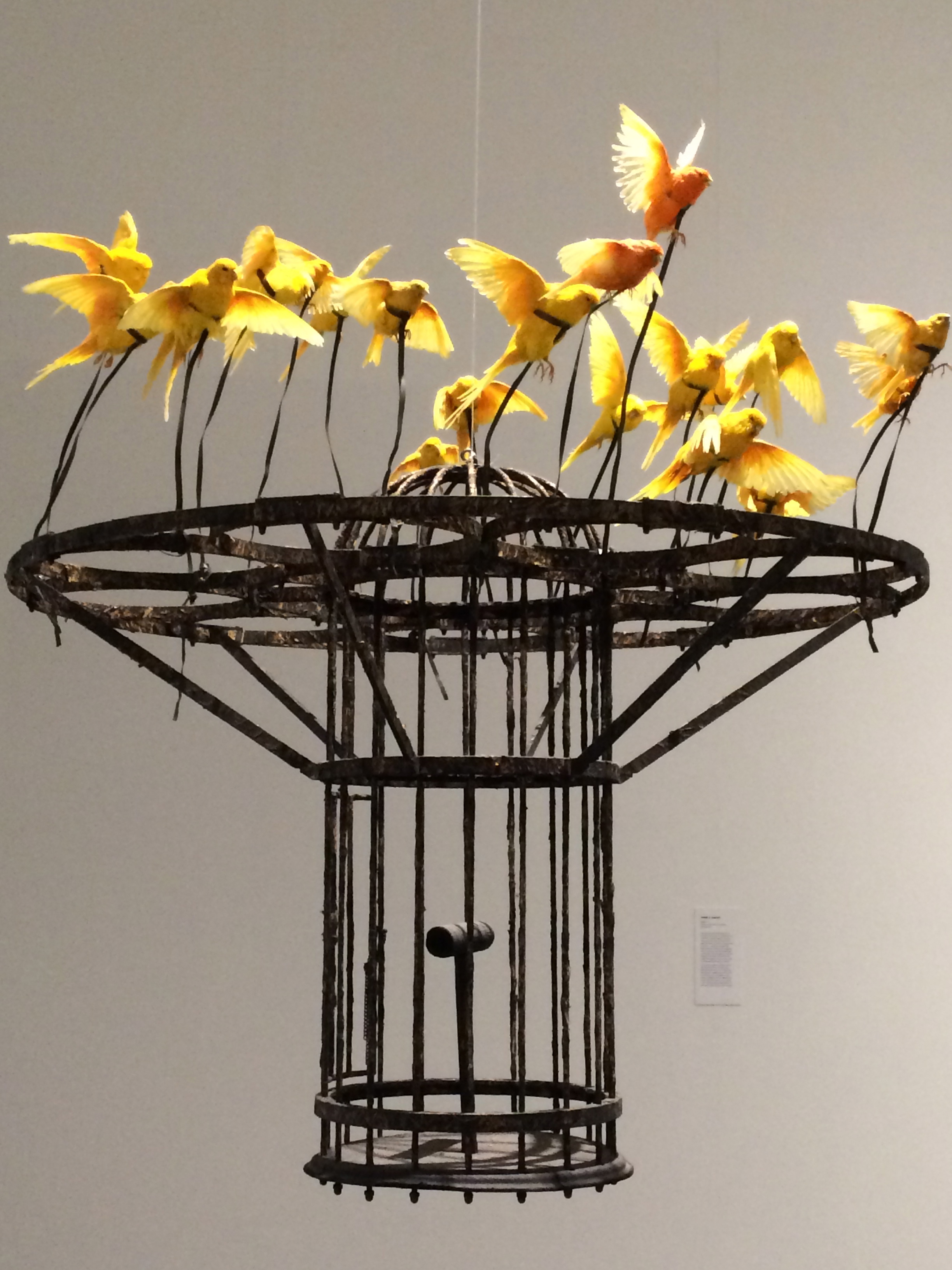 Glass so thin today,
we in the lower bowl
are swelled by light and air,
clear atmosphere, brilliantly
tinted by elm trees
a hundred feet above our heads

The yellow jazzes
even if it’s November’s hour glass;
then sands ting and settle,
our limbs replete, filled.
Shift your excellent body under mine:
the hour glass flips again.

Thanks to C.D. Wright for the “excellent” line.

Attempt emergency resuscitation:
it lays on a pyre of fighting words,
gasping and fluttering.

The lilting head of a blue hydrangea
thick and petalled, thinking.

Even brooding is old-fashioned.

Bludgeon me with your compassion.

Shout it till you’re blue in the face: I love you, stupid!

Let Me Be Clear as a coffin lid.

Brood your way through the American spirit
back to the Scarlet Letter.

What creature wouldn’t want to jump them

the Bible’s full of it

Let’s all have another cup.

The word ex-patriot makes me blue.

I’m in exile from being an ex-pat.

Singing is a celebration of oxygen.

The celebration of oxygen is every artist’s charge.

If there’s one thing you do, celebrate oxygen! 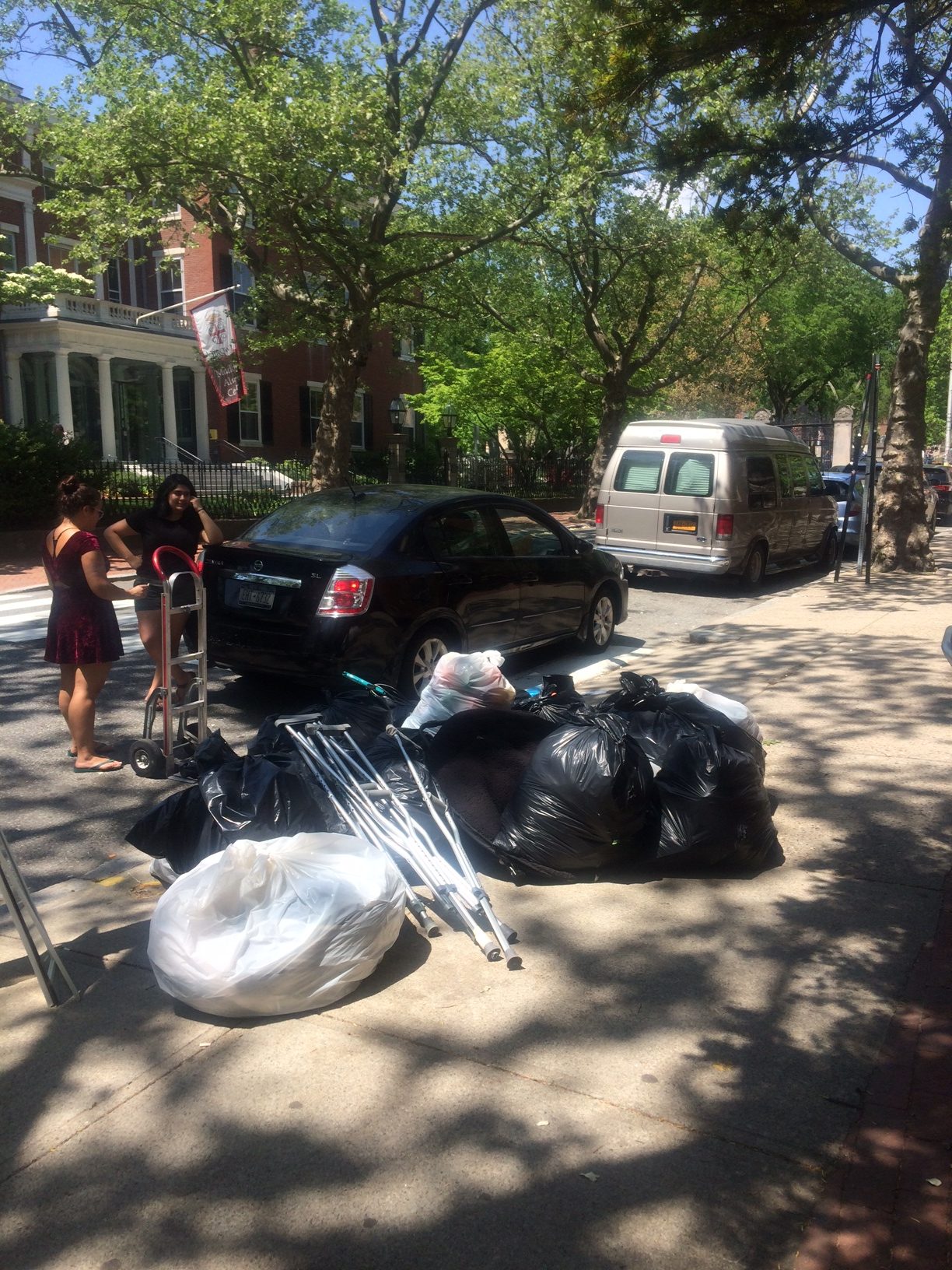 The RITES OF MAY
to Don DeLillo

Living next to Brown I see
the flying styrofoam pitched by mother
in a pique of anger.  The Chinese doctor

twisted bike frames blind, without eyes
crutches, messy Amazon boxes; wait –
Is this Lourdes?  Against a wall
heaps of discarded crutches – the plagued can walk!

Oh, the disarray of time, the leap
from melancholy autumn, sentimental
goodbyes amidst the burnished elms.

Relief!  My own sassy, long-haired girls
are heading home – and with curated
transition will settle in.

It isn’t “Sunrise, Sunset” which I played
on the black and white upright at nine
feeling sorry for the parents bereft

It’s refeathering – the kids are moving
back in.

Are flushing out darkness.
They have reasoned down
the dome of the sky.
There is only starry light, not starry
night. Eyes refuse to close,
we are a dreamless troubled lot.

Our nerves catch every
morsel of bread tossed to us,
sick from being overfed.
Yet we are starving, hungry still.

Love me in the cellar
behind the stairs.
Burrow deep so I may remember
the questing of bells, the touch of my
own hand. 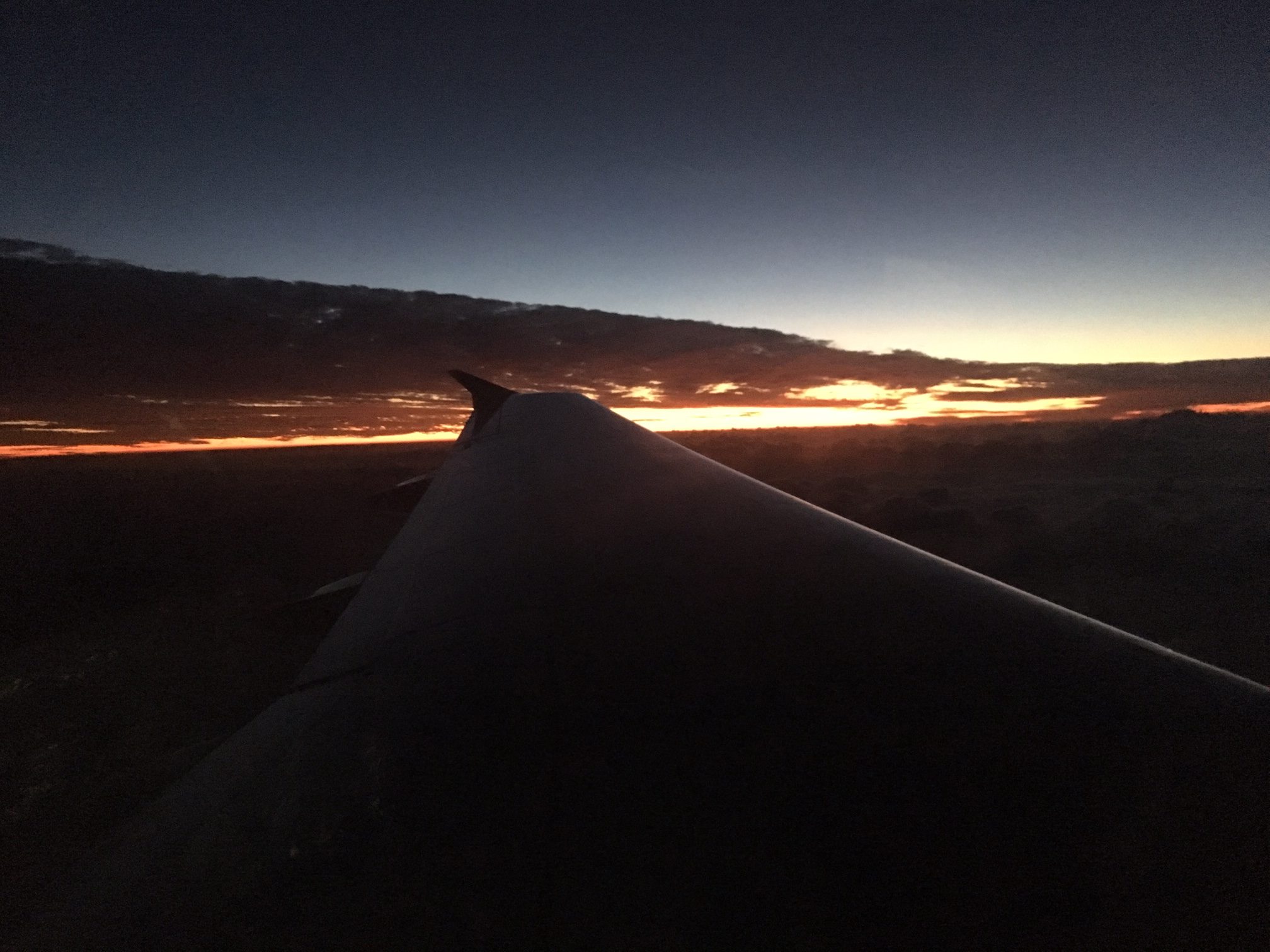 Something is happening back in Washington,
though we are 40,000 feet above the Mediterranean.
We are rising high, the scalloped
edge of the Holy Land a mere hem below,
through unraveling skeins of clouds,
the hush unearthly.

It is 18:30, late day rays spreading,
just another day ending.  Look! – I gasp –
the liquid fuchsia in the
untouchable distance

(while seven hours back, he
is laying his small hand on his family Bible)

That red lake of light pooled in the clouds!
Clearly not the devil’s stirring pot –
too beautiful.  No sinners turned upside down
no naked bodies skinned
although we don’t have our binoculars handy.

18:45; 19:00.  The tide is turning.
He wrests the podium.  Fans are
magnified in his mind.  Although we are in
Lebanese airspace, soon over Turkey, we can
practically see the spottiness of the crowd.

In Rome, the Tiber is misting moodily,
Paris birds are skittering gaily
in the frozen fountains of the Tuilleries.
No matter where we are
(40,000 feet above the Mediterranean),
the world is spinning madly.

The crickets chant
an endless round

you can hardly
hear their dervish call

a distant planet
a rubbed-out moon

they woo my heart
as big as the abyss

they sing without a sound
beyond the open door

Ode to a Cold

Cold of the ancients! My head
Is a stone. O sun, the fog is lifting.
Bring me some lightness and
Patience.

Streams of the healthy rush
To jobs in cities.  My labor is breathing
And easing the drip.  Curtains
Of it slip.

When I talk, no one hears,
And when they talk, I can’t hear.
Opacity! Tea,
More tea.

Steaming water: a bath to
Breathe into.  Muscles give way
To grapefuit and citrus
And eucalyptus.

I bow, bow to clouds,
To shreds of cirrus as naturally
My viscosity gives way
To bliss.

Riffing with My Daughters after the Sharansky-Douglas Show

One evening after seeing Natan Sharansky,
I was telling my girls who he was when he was
famous, brilliant, mythic, admired.
We were drinking tea, it was late.

But the excitement of the day – rushing
towards an illegal spot, jostling the crowd,
seeing Michael Douglas – a thrill even if it
was a bit of a horse and pony show –

must have made me ditzy. Not to mention
the absurdity of protests– a couple of old
Jews sitting around kibitzing?
Police with guns had been called in.

So I told them, When Natan was finally released
from prison, about to board a plane,
he sat down, refusing to move.
The Soviets wouldn’t give him back his book of palms.

Palms? I’d been mixing up words a lot.
We howled. I’d meant psalms, ones that he’d
read over and over during those nine dark
years of being a refusnik.

We laughed harder about my
mistake, knowing that the book he’d held in his hands
had become part of his body, the front and back
covers like left and right hand.

Or the reverse: his thin body had become part
of the book. Open-hearted, open-palmed like an
eternal harp song.   He’d become free;
prison was merely an encumbrance.

Mandelshtam wrote, You left me my lips,
and they shape words, even in silence.