The core of Clio’s journey, both inner and outer, is based on experiences of my own.  As a young Jewish woman from Pittsburgh just out of Brown University, I came to New York in the ’80s and wrote about rap, the music as a springboard for understanding creative and cultural experience.In that culturally vital fifteen years, I wrote about politically conscious rappers, breakdancers, world musicians and international celebrities.  After being employed as an associate editor at Paper magazine and Us Magazine, I moved into freelance journalism, writing regularly about culture for Vogue, Elle, Spin, Harper’s Bazaar, Spy, the European, and many others.  My profiles of musicians include: Wynton Marsalis, Whitney Houston, Sinead O’Connor, Johnny Rotten, Nile Rodgers, Chaka Khan, Ziggy Marley, Professor Griff and others.  I have profiled writers Marguerite Duras and Patricia Highsmith, and filmmaker Roman Polanski. I wrote Elvis for Beginners for Writers and Readers.  My roundtable of female rappers was anthologized in Discourses: Conversations in Postmodern Art and Culture. 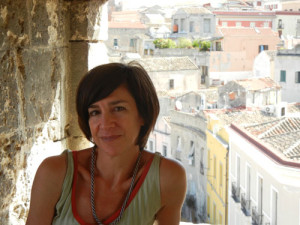 I moved with my husband to France, first Paris, years later to the countryside around Perpignan, where I continued journalistic work, writing for Paris Passion and The European, and raised two daughters.  In the ’90s, and in many return trips every year, I witnessed the transformations of the Spanish/Catalan self, from post-Franco explosion to a development of consciousness of a Jewish medieval center in Girona.  Girona was a place of poets, Kabbalists and spiritual thinkers.  It is from here that the idea for my novel was born.

The novel is a facet of my creative work.   There are poems in Clio’s Mobile Home; I am also serious about writing poetry.  I work on short shorts, and short stories.  They are all modes of thinking about identity, ecstasy, aesthetics and spirituality in contemporary life.  I write a blog, fictionally written in my protagonist Clio’s voice, called Full Dance Card. http://fulldancecard.blogspot.com/

I can be reached at: jill@jillpearlman.com