Posted on April 3, 2015 by jillbpearlman 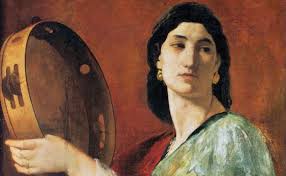 I am imagining a little skit of two Jewish women kvetching at Passover.  They talk about how nothing changes: the degradation in Egypt, known as Mizraim, is not the distant past, but same old, same old:

The world is always unjust, bursting with criminality and verging on destruction.

They complain a bit more. Then, as the Seder rolls into full swing, these women – my mother and grandmother – shake their shoulders as the plagues finish.  Now they get to the great part of the story – Miriam’s song.  They recognize her eruption of joy on the other side of the Red Sea.  They know it has to be part of the deal.

Miriam arrived breathless, having been up to her nose in water. Eye to eye with the abyss. The other escapees were nearly stunned. They were still remembering the violence, in killing, skies turning black with locusts.

For the moment, the collision of everything inside – fear, panic, loneliness, desire – came out of Miriam in a woosh of expression that engulfed her whole self.   They were alive.   She raised her tambourine, and the women danced.  They weren’t in it alone – there was Being whom they praised, and there was Moses and their families.   In Miriam’s gratitude was a release, a gift that let something else in.

Grandma Elaine was a flapper in the roaring ’20s, running from her home in Philadelphia to St. Louis to elope. Granmmy Anne played a mean jellyroll on the piano.  My mother, Doris, swung to Frank Sinatra and Tony Bennett when she was a precocious teenager prowling around Atlantic City.

I’m not sure they ever forgot that walk between life and death.  That’s what gives the music tension and longing and ground.  That what allows it to fly.  To the memory of song!

2 Responses to Swing it, Miriam