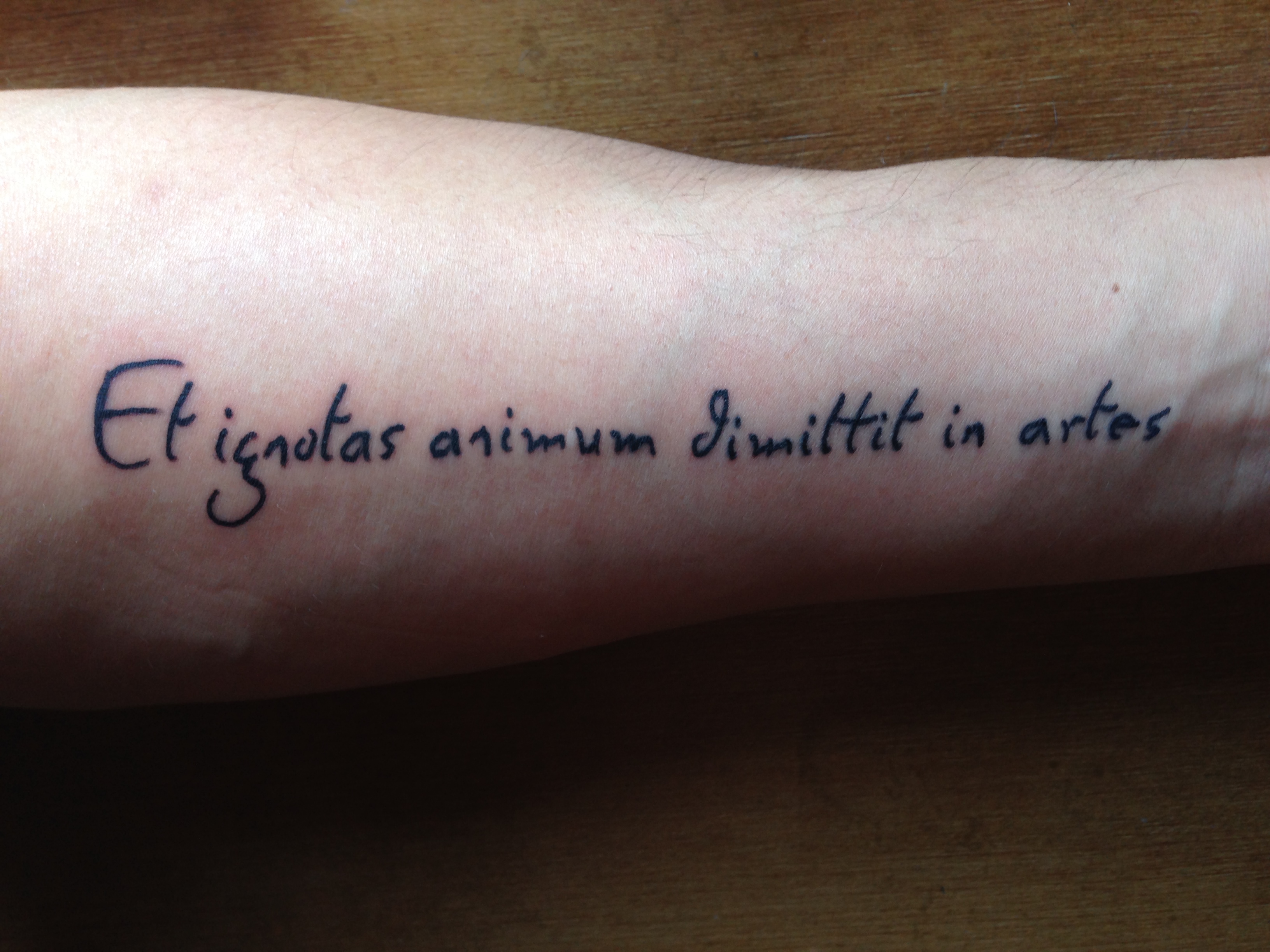 And he sets his mind to unknown arts.

A Portrait of the Artists as a Young Man, by James Joyce, epigraph

I don’t know many people who have Latin quotes from Irish modernist classics on their arm.   It’s not a picture of an anchor or Mom or serpent, and it’s brilliant!  Contemporary composer and musician KenUeno takes as his watchword the freedom and risk of the artist, the need to rise above confinement, to live in the soaring mental and aesthetic space between heaven and earth.

In classical mythology, Daedalus did it.  He “set his mind” to flying away from Crete, imagining the only space that wasn’t controlled by King Minos.  His art took him towards the gods.

James Joyce in A Portrait of the Artists as a Young Man took as his model that master artist. His character and alter ego, Stephen Dedalus, escaped into exile to work outside programmed language and Irish Catholicism.   With risk and exhilaration, he jumped into unknown arts, breathed in the sound and feel of language.  He fought for the artist’s natural place between man and the divine that partakes of both, a self in suspension and in progress.

Ueno allies himself with the artist who slips out of accepted labyrinths of culture. Here he is speaking about his tattoo:

“Ever since I was in high school, when I read Joyce’s Portrait of the Artist as a Young Man, I have been in awe of this epigraph.  It’s a quote from Ovid’s Metamorphoses, capturing the moment of inspiration when Daedalus thought of inventing flight.  It speaks to all moments of creativity, of transcending terrestrial boundaries.  It also speaks of the presence of history in creative acts that point towards the future, as well as the integration of life an art (Portrait started as an autobiographical sketch), which has been important in my art practice.  So, when it came time to get my “tenure tattoo,” I knew what I wanted. The font, I would like to note, is based on Da Vinci’s handwriting. It is important to me, since I use it in my scores.  I’ve been in exile my whole life like Stephen Dedalus.”

Ueno is the composer of “Four Contemplations,” music commissioned by and performed with Community MusicWorks March 26-29, 2015.  For more information, see  Communitymusicworks.org   To read my profile of Ken Ueno, click here: http://communitymusicworks.org/how-to-think-about-oneness-an-interview-with-ken-ueno/