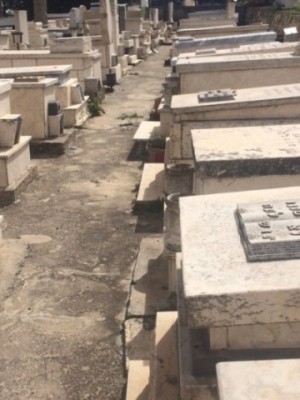 I hadn’t been expecting such a moving encounter with this old Israeli cemetery. On a hill in the backcountry near Ma’alot, in the dry winds, the present was quiet, but the past was talking. Inside the gate was all stone, simple porous stones huddled close together as if they were still in urban ghettos in the old country.

The stones looked the same, inscriptions on the front, little netted boxes in the back where lighted remembrance candles can breathe. Looking closer, I saw that the dead had once spoken all different languages – French, Spanish, Russian, Hebrew.  All were diaspora Jews who had ended here.

Many of them had been born in black dates of Jewish history.  The late ’30s.  1940. ’41. ’42.  To have been born a Jew in 1942, in Europe, boggles the mind. Nature made sure that babies kept coming, but the fear, joy and courage of parents bringing babies into the world seems unimaginable. Of the parents we know nothing. Somehow these children, born under the curse, managed to get to Israel, and live their lives here. Were the lives full? Tortured by survivor guilt? How much did they complain? Eventually they were returned to the earth. They are the past – part history and part indestructible stone. 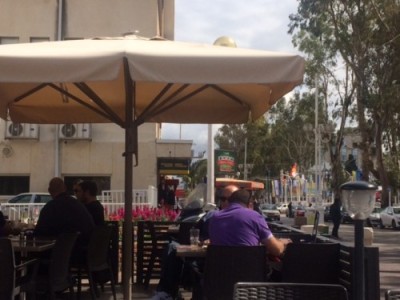 We were sitting in a restaurant in Nahariya, northern Israel, watching Netanyahu’s speech to Congress on the small screens of our cell phones.  The Israelis there – some young native-born, some immigrants – seemed convinced that Israel would be decimated if Iran gets a nuclear bomb, so what’s protocol when the world is about to be destroyed?

But others were eating big salads, local fish, and the great Israeli dish shakshuka with its runny eggs in a bed of tomato-pepper puree. Two things – eating and talking – are people’s lifeblood. Whether they talk about intricacies of US politics that would put many Americans to shame, or pensions and cost of cottage cheese, they talk.  Politicians come and go, one no better than the next.  Just to make a living, to keep up small apartments and small cars is headache enough.

It’s a Middle Eastern country of tremendous complexity, part Magheb, part West.  Some cities naturally yield to gravelly grit and sand.  People push on, kicking away stones from their path.  And talk about it. 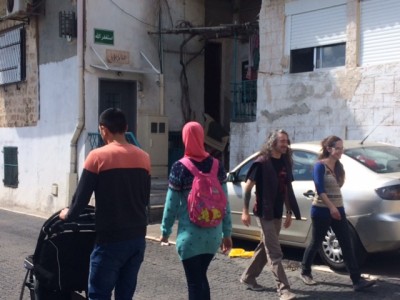 In Akko, the next town over, the afternoon is quiet until a burst of noise erupts behind high walls.  School children rush out of class to the interior courtyard. They scream, they yell. Then the doors of the school in this mixed Jewish-Arab town open onto the city square. Every little girl is wearing a pink backpack. She goes to her smiling mother, in a headscarf.   Sometimes a grandmother in a long robe.   The boys hang back, cool in their jeans and soccer shirts.  It’s a Christian school for Israeli-Arab kids in Israel – a wary coexistence, but coexistence nonetheless.   As they walk home, kids skim stones along the water.

1 Response to Israel Past. Present. Future.