Posted on March 6, 2015 by jillbpearlman 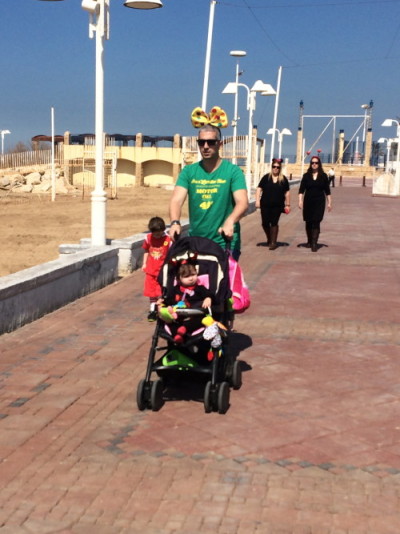 Everyone thinks they know Israel. What’s really foreign is everyday Israel, the place behind the headlines. This week I slipped quietly into Nahariya, a middle-class seaside resort town during the off-season. It is the town, ten kilometers from the Lebanese border, that was supposed to become a Cote d’Azur. When the abandoned hotels didn’t click, they were turned into old folks homes. The state moved waves of immigrants there as well. On an average day, you run into Jews from Azerbajan, Kazakstan, Morocco, Ethiopia, Yemen, Spain, France, Germany, Poland and America. There are Arab women in simple headscarves driving in learners’ cars, and other women, in the nearby town of Akko, sitting in cafés smoking hookah. Feral cats knock around on the streets, slipping through gates to the ocean, prowling the closed-up changing shacks.   Workers are starting to trim shrubs besides the ocean.

No one in town feels particularly wealthy; there is some show-off Miami Beach stuff, like faux sneakers with rhinestone laces and big sunglasses, like leather and leopard jackets favored by Russian women. But otherwise mothers sport black leggings and skirts, their daughters carry pink backpacks and sons Messi soccer shirts.   The religious headcovering has a hip, desert feel. Men wear jeans, period.

From many people’s reports, business is done with a lot of haggling and casual dealing. While Jews like to pretend otherwise, many share the olivey good looks of Arabs, their language is Semitic, they eat the same food, like the same music. The conversation about who stole from whom first, who refused to make peace, about violence, oppression, land and water are endless, way beyond this short take. Israel’s problems, its existential threat, its militarized nature is endlessly complicated. I’m only saying: away from major cities with their air conditioning, universities and power brokering, Israel feels less like Europe and more like a Middle Eastern country that in many ways it is. It was a week when Netanyahu upended Washington and world politics, and major elections were less than two weeks away. Even when the celebratory holiday, Purim, recalls an averted annihilation of the Jews, there can be a simple, temporary lull.

This entry was posted in Uncategorized and tagged #Israel, Akko, Nahariya, Purim. Bookmark the permalink.