Never without a Fiddle

Posted on February 8, 2015 by jillbpearlman 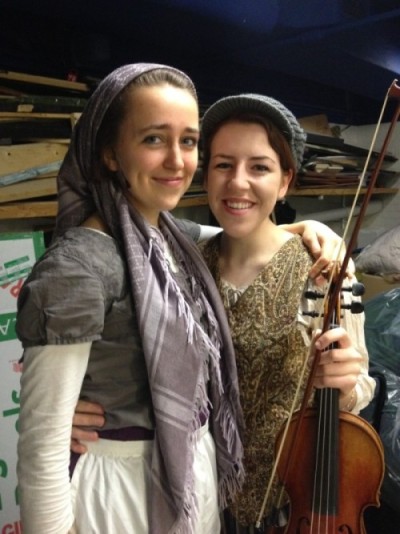 Chava and the Fiddler, Fiddler on the Roof

My great-grandfather was a peddler in the old country of the Russia empire. His legacy was contained in one letter, written by an uncle, and that letter has been lost.   But the images of the letter inflamed my ten-year-old imagination: “He had a horse and cart, and from it he sold fabric, wool, thread, bits of this and that from village to village.” Even more astounding was a description that included me: “Your great-grandmother was a beauty. She had eyes as black as coal that shone like yours.”

Enter the Fiddler, 21st century child of mine going back to 1890s to play the unnamed violinist in the musical Fiddler on the Roof.   Her university production was elaborate, with an most-goy cast renewing interest in the poignant tale of Traditions being torn and tossed.

My family became successful Americans, but remembering their roots in the Lithuanian and Polish shetls was fraught with tension.  There were acts of sabotage by upwardly mobile children of immigrants. It always surprised me how fast they dropped their past as peddlers and their association with the Old Country, how being “nothings,” was nothing to remember. Their scrappy beginnings of living over the store became buying houses at auction during the Depression to buying twin-sweater sets and skirts, convertibles and banging out careers. In the immigrant country, being “someone” was done without irony. Let’s face it, peddlers were losers.

As for artists, they treated memory to creative replaying of the past, a suspect act of nostalgia.

Regardless of the outward intentions, the inward anxiety has not been lost.   The thread or shred or deep wisdom about the nature of permanence remained deeply inscribed.  The long trauma of the wandering Jew has led to an intensity.  The attitude is “be here on this place, but don’t expect it to last.”  The only thing that survives is an idea, an ideal, a “mobile home,” as my novel calls Torah, the book in which Jews have always lived.

Whatever Torah is these days, it is not a piece of land.  The idea of “homeland” has been so corrupted and distorted by trauma.  Israel has not solved the problem, has even exacerbated the tragedy.   In the treacherous now, instinct tells us to keep our bags ready, to have that dough that might be grabbed on the run, whether or not it has already risen.  It can become matzoh.   To be the gypsy, the bohemian, the ragpicker, the peddler seems like a smart stance.

But never without a fiddle!

This entry was posted in Uncategorized and tagged fiddler, Fiddler on the Roof, home, homeland, shetl, wandering Jew. Bookmark the permalink.

One Response to Never without a Fiddle