The Artist as Ragpicker 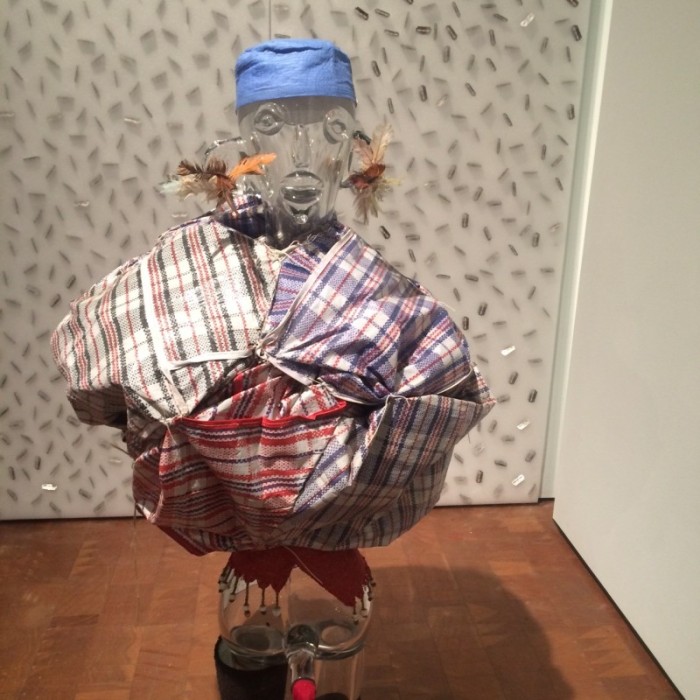 Baudelaire saw the poet as a ragpicker.  Battle-scarred by urban society, the artist had to collect scraps, images, words and piece them together.

“One comes upon a shaking ragman, who/staggers against the walls, as poets do/ and disregardful of policemen’s spies/ pours from his heart some glorious enterprise,” Baudelaire wrote in “The Ragman’s Wine.”

Speeding ahead to the 1980s, the marginalized urban musician became ragpicker too. Hip hop picked up scraps of sound and fitted them together into rough, explosive packets. The artist became urban scavenger, responding to the shock of reality with an aesthetic mirror.

Pascale Marthine Tayou, an artist from Cameroon, puts words, sound and visual material together to update the global urban schlepper. At UCLA’s Fowler Museum, his first museum show in the US, Tayou takes bits and pieces from Ghent, Brussels, where he currently lives, and his native village in Cameroon.  A restless traveler, he considers all gleanings as worthy material for his installations.   Like his predecessors in scatter art, Tayou does it gleefully and ruefully. He observes the squeezed housing of the favela and represents it in the accumulation of hundreds of wooden bird houses, along with a chirping soundtrack. Bowls of red liquid, titled “human blood,” suggest the horrors of military strong men called “power figures” and built of nails.

Tayou’s ultimate weapon is his ability to feel the undying essence of things. His “things” resonate with their own spirit.   His ragpickers, called “Les Saveuteurs” or “Rescuers,” are fetish figures with soul. They’re dressed in the large plastic sacks that are known across continents for schlepping stuff. They sport knitted fabric, socks, hats, feathers, straw, hair.  Borderless exiles, they nonetheless have a purity (they are made of transparent Italian crystal) and reappropriate the primitive that was “borrowed” by Picasso and others.   The ragpicker forgets nothing and manages to retain his vision of a seer.

1 Response to The Artist as Ragpicker