Ink should run, not Blood

Posted on January 7, 2015 by jillbpearlman 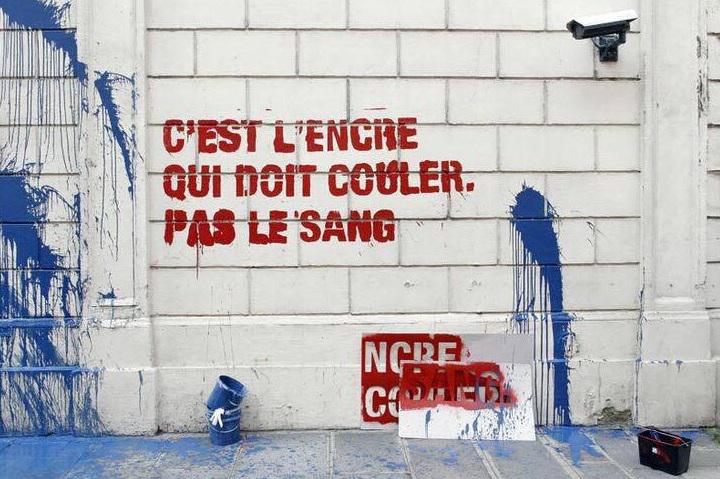 Art is once again on the front line, in the public eye. Art is almost always on some edge, on some frontline of response to the inadequacies of humans and the world. It is usually less visible than it became on January 7, when cartoonists and journalists of Charlie Hebdo were gunned down in Paris.   The terrorists made art look very dangerous, threatening to society, and of course, art is, or should be. Art is always engaged in some essential way in refusal, whether it’s refusal to accept a lazy, inured way of seeing, or holding a mirror to falseness or by posing a contrast of tremendous beauty, waking people up to sagging, gray or cruel reality.

Religion of dogma and violence and assassinations is not real religion.  Religion has wild imagination and, like art, is dangerous in a world where power depends on grids of order and rational thinking.  The irrational power of beauty challenges the attempts to limit and define experience.

I’ve been fascinated with this question of how artists respond to our contemporary world of violence and war.   There are two wars, concrete violent ones and culture wars. Manash Bhattacharjee, writing in Guernica, https://www.guernicamag.com/daily/manash-bhattacharjee-return-to-commitment/   is obsessed with the same issues that I am. Among many other points, he discusses Jean-Paul Sartre’s criticism of poetry for “only” having a “moral commitment,” not a “political commitment.”

Who now would slag moral commitment when there’s so little of it?  We can talk about that later in other posts, but for now, we recognize artists Cabu, Charb, Wolinski and Tignous for their long-held political commitment.  And for the outrage and commitment to imagination that these artists have today spurred.

This entry was posted in Uncategorized and tagged #CharlieHebdo, #JeSuisCharlie, Artists in wartime, Paris, political cartoonists, terrorism. Bookmark the permalink.