La Vendange of the Marquis d’Espagne

Posted on September 17, 2014 by jillbpearlman 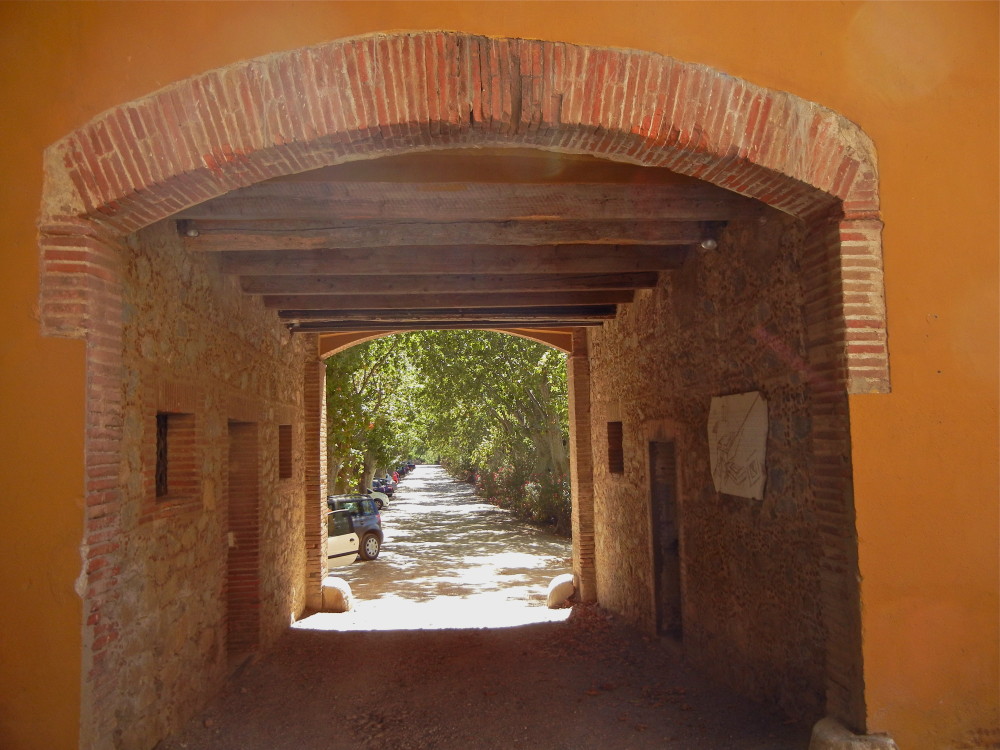 We used to live down the road from the Marquis d’Espagne.

Writing from where I sit now, in a fusty New England house of rigid lines and upright lives, such a sentence seems implausible.  Do marquises still exist? Maybe I was time-tripping one lazy afternoon and invented an adventurer’s past. Or I successfully took up a challenge of my daughters: If you could live in another era, when would you live?

But if I didn’t really live there, where did my sensory imprints come from? Once you’ve seen those colors of the vendange, the illuminated red seas of the grape harvest, you don’t forget them. And the rot! A whiff of it came to me when I leaned over a water fountain recently, in an area of Rhode Island that has questionable water. I flashed on the scent of stems rotting on the vines. Ah, noble rot!

Maybe I got my knowledge from books.  Books are the best proof of authencity, the place of incontestibility. Aha! I myself even wrote a novel called Tramontane about life in southwest France.  Things were starting to make sense.

I began flipping through the pages of Tramontane. Apparently, I was living down the road from Mr. Marquis in one of his outposts, an annex built of golden stone for the mules and horses. Further down the path, Mr. Marquis had a sprawling stone farmhouse called a mas with many roofs – quarters for the artistocrats, quarters for workers, for the animals and for the vegetables.   He had a giant, solitary parasol pine in his courtyard. His massive estate had once been part of Catalonia, but now was a regular estate at the foothills of the Pyrenees. And every September there was a vendange, a fête to Bacchus, the fields full of seasonable workers, some with baskets on their backs!

“During the vendange, the heavy air outside was filled with the scent of the vines. Sabine could look see the curve of a bent back, the red flash of a woman’s headscarf, the steady motion of a man’s shoulders as he moved up and down, barely keeping his head above the vines. She remembered, as a child, the poor Andalusian families who had traveled to Perpignan by train and sat on their suitcases as her grandfather chose the best.”

From my study, I could practically see the Andalusians sitting on suitcases in the Perpignan train station waiting to be chosen for work. You can’t make those details up!

Hungry for details, I found a passage that described how the grapes had to be picked at the right time. “The marquis would then slip his hand under a bunch, delicately weighing the grapes in the unblemished cup of his palm.”  Ecstasy!  I read more about the wine: “Like the rose-colored walls, it trapped the sun and released the light slowly. It radiated in the chest, under the ribs. It exploded like the coming sky with plumes of violet and scarlet. Then a sudden click would come, and night tones would fall.”

I twisted in my chair and become fascinated with the twisting vines. “Light bounced along the neatly combed rows of vineyards that covered the plain.”  And then, “Some of the vines took hundreds of twists and turns and still knew which way is up.”

The slanting sun of Indian summer began to beat against the ochre walls of my New England study. They began to merge with other walls. There were always the walls: The pink walls, the pale mortar, the brick all glowed in the sun.

And there were the meals, nightly feasts for fifty family and seasonal grape pickers. And there was the mythmaking: “In the celebrations, giving and taking were spoken in the same breath, the same as boss and worker, Spanish and French, girl and boy were swept up in the feast of nature. The guitarists dueled, men kept time in their palms and women stomped their feet as they danced.”

I put the book down.  If only I’d been there!  But I remembered that only a few years ago I was in French Catalonia.   And I remember very clearly, in my own mind, standing on a street that was turning red from wine. The gutters were gushing with overflow, with wine. It was in Trouillas, the village of communal production where small farmers bring their grapes and get paid by the kilo.

It wasn’t blood at all.

The blood might come later, if war get worse and spreads to all corners of Europe. But I was there in the early part of the 21st century. In the early 21st century, the streets were only running with wine. I was there. I saw it with my own eyes.

This entry was posted in Uncategorized and tagged #metafiction, la vendange, Roussillon, Tramontane, writing about writing. Bookmark the permalink.

4 Responses to La Vendange of the Marquis d’Espagne