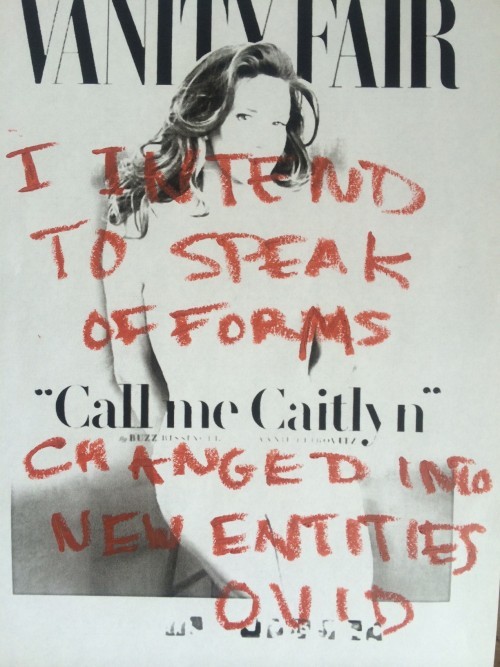 The spectacle of metamorphosis is everywhere: Ovid is everywhere. We could consider Ovid, the controversial, ultimately banned poet of the Roman empire, the poet laureate of our own profoundly unstable era.  Ours is an era of personal and cultural shapeshifting.

What would the Roman poet, Ovid, do with the story of an Olympian athlete who, bit by bit, injection by injection in the public eye, became transformed into a beautiful woman?

Ovid would write in dactylic hexameter in a cheeky, teasing way. Consider the myth of Daphne where he lyrically details the drama of loss and transformation – the fleeting disappearance of nymph’s loveliness as “thin bark closed around her gentle bosom, and her hair became as moving leaves; her arms were changed to waving branches.” Daphne is fleeing a brutal rape by lust-driven Apollo.

With the drama from Bruce Jenner to Caitlyn, he’d document the work of hormones to soften the skin and shrink muscles, of depilation of hair and plastic surgeons. He’d note a swelling of the new bosom and creation of a waist. He might note that the protagonist has dropped the narrative of escape from male power and adopted a modern myth of identity, that of personal choice (“I want to be authentic”).  Jenner has stepped from the image on a Wheaties box to another image – glamour queen on the cover of Vanity Fair.  We don’t know backstory of any aggressive violence s/he might be escaping, besides a chase within Jenner’s own self.

Ovid wouldn’t miss, though, the political dimensions. The poet’s lightness and mockery of the order of the old gods vexed and annoyed the Roman empire’s sense of order. For besides Ovid’s observation that “everything changes” was the other profound truth that the official order is based on its imposed sense of order. Crossing of borders, hybridization and redefinition threatens the authorities’ control.  The hybrid of gender, of melting and changing and shifting is the latest chapter in an old shakeup of control.