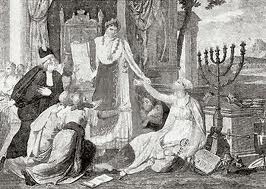 Napoleon granting freedom to worship to the Jews

Stranger things can happen – but I did hear the words of Kaddish, the Jewish prayer for the dead, sung to the tune of French national anthem, La Marseillaise. The sacred words walked into a very strange house.   It wasn’t random, like someone who wandered into a karaoke bar and got mixed up about what room he was supposed to be in. This was of an intentional doing, imagined by French Jews in the 1830s wanting to – well, join, sing, be good French citizens. They finagled a way to fold and mold, to merge and fit the ritual repetitions of ancient Aramaic into the bloody militant call from the Revolution that had become the country’s patriotic hymn.

Instead the musical phrases “Allons enfants de la patrie” usually sit you get “Yit-gadal v-yit kadash sh’mey raba.”  What? This takes some getting used to. The familiar rousingly march of accented two beats now merges with the familiar emotional intoning of grief.

The song goes on to praise God’s name in the spaces where French sing to destroy enemies. Where the Dionysian energies lift to a swelling peak, where all citizens are urged to get their weapons arms and smash away, (Aux armes, citoyens!) we’re hearing ba-gala ba-agala!   In the place of lyrics we can sing by heart (Marchons! Marchons!), we’re hearing u-vizman uviz-man!

It’s not that Kaddish doesn’t get around. It was used by Allen Ginsberg in his famous poem of fury, Kaddish.  Leonard Bernstein wrote a Kaddish Symphony #3 and Mohammed Fairouz mixed his Kaddish with Palestinian and Jewish poetry in Poems and Prayers. It sounds like a Jewish joke, like Serge Gainsbourg did like Ginsberg and made a deeply subversive and joyous critique with the reggae-dub “Aux Armes, et caetera.”

This idealistic energy of nationalism is certainly a relic.   It does show a belief in hyphenated identities – French Jews believed they could be Jews and fully French.  And I’m fascinated with all kinds of mergers, hybrids, efforts of extension and reaching across the aisle.  Most French Jews still do believe they have a place in la patrie.  But this is an odd duck.   Bending praise of God into superiority of country doesn’t work.  The evidence is all around us.