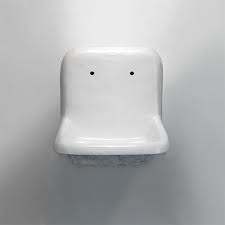 I have never been so moved by a sink as I was with Robert Gober’s recreations of sinks.

I was already in an ecstatic mood on the train. I was watching everything as if seeing my life pass before my eyes. It didn’t matter than it wasn’t my life: it was our life: snippets of coastline, manicured reeds, girls walking, shingled houses, then auto shops and junk heaps. Found objects. It was all stunning, somehow.

When I opened my magazine to the New York art listings, I read about how an artist whom I hadn’t known, Gober, uses found objects – or lets the objects, antique sinks, find him. He doesn’t blurt out what they mean, or if they meant anything at all. Then I read: “His works are enigmatic but not coy, morally driven but not aggrieved. They radiate a quality that is as rare in life as it is in art: character.”

I looked out the window again, unseeing. I was so moved that I almost didn’t feel I needed to see the show.   The train came into the Bronx and arrived at Penn Station. I was so exhausted from my excitement that I just wanted to go to my hotel and sleep.

The next day I arranged to see a friend for lunch. Beforehand, I went to MoMA to see the Gober retrospective.   At first I didn’t know what to make of the sinks. The room was full of them. Letting them unfold, I began to appreciate that they had been made by hand, the surfaces with the tactic allure of ivory while having subtle grooves and bumps. Their surfaces were sensual and beckoning, but they couldn’t be touched, and there was a sadness to that. The sadness gave them a saintliness.   They were white and empty and beautiful and sad. They were useless in their most obvious function. They were meant to make things clean, but they were helpless at that: there were two holes where the spouts should have been. The empty holes pleaded, but remained remote.

Gober, who is gay, made his sinks in the mid-eighties at the height of the AIDS crisis. Cleansing oneself of infection became obsessive and tied up with notions of purity, hospitals and isolation – the opposite of sexual union.

There were rooms of other later pieces that explored sexuality, cultural violence and hypocrisy. The final room was an installation situated in a paint-by-numbers forest. In that closed-up room, the sinks returned. And this time, they had faucets. This time, water was pouring like crazy. It was splashing into the basins, bubbling, nearly overflowing.   It was one of the most cleansing, cathartic moments in recent memory.

“Robert Gober: The Heart is Not a Metaphor” at Museum of Modern Art. Through January 18, 2015.