High Noon in the Midi 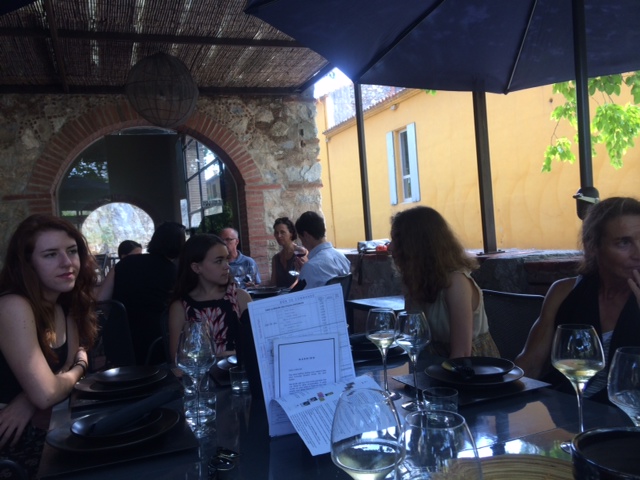 High noon in the south of France is the time, exactly midday, exactly like the rest of the world, when the sun is the highest point in the sky and shadow of an object the shortest.

Unlike a film where there is a shootout, or the high pitch of a crisis, the cusp of noon –  midi – in France is one of near-perfect balance. The morning speeds up to noon  with an almost religious fervor, and then midi arrives  – ah, rest, stillness, the center point of the day.  In the countryside, we feel the verticality of the pole,  the solidity, the weight of things.  That green oak tree, that ochre house, that stone hold its place like nothing else could.  Their shadows are practically nonexistent.  Nothing else could exist at the place at that moment.  There is the feel of rule or decree to the sud.  Its silence is the power of a focused energy.

In the charming city of Perpignan, urban dwellers give midi a slightly different spin.  Like many things in France, it revolves around lunch.  Before lunch, there is a frenzy in the stores, like the half hour before Shabbat.  Lines suddenly materialize at the cash register for which there are never enough workers.  Women who are late in their food shopping rush in with their baskets, people juggle coins in their palms as they wait in line for their bread.  Cars pulling up to a boulangerie,  leaving the motor running as they dash for their baguette.

Then midi – actually 12: 30 – arrives, merchants pull down their metal grates over their store windows and as they stroll over, diners are already cross-legged, comfortable in the little alleyways between the color-washed buildings.  The sun is bearing down over there, but they are well centered with their food and quiet chatter.  The plate of appetizers arrive, they sip a glass of rose, with a fork take the first bite between conversation.  The glow, the rightness spreads as time slows and the pleasure of life savored.

Try to have lunch at 2pm in Perpignan and you’ll be disappointed.  C’est terminé, madame.  Lunch is at midi, midday.  C’est comme ca.  That’s the way it is.  There is a balance to the day, a sense of proportion.  The French feel it in their bones, with the same genius of their impeccable instinct for food.   The archicture of their day and the structure of their food is like balance of the Greeks in their stunning temples.  The French are the inheritors of the classical sense of proportion.  The natural order of things is in the culture, in their bones like a balance between shortest shadow and longest sun ray.  They don’t have to articulate or question or explain.