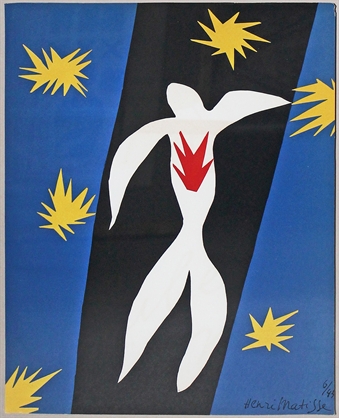 The earlier Fall of Icarus, from the revue Verve

The sheer compression of  emotion in Matisse’s artist’s book, Jazz, is stunning.  It is both joyous and violent, an explosion, and the viewer marvels that Matisse was both deliberately and spontaneously capable of ordering and expressing the essence of his being.  Seeing it at the Tate Modern in London, I realized that Matisse was working during the war.  Although the date of publication was 1947, he had begun working on it in 1943.   He was creating during the depths of the occupation of France.  What brilliant artistic instinct to point the compass to the source of creation, above all, and to life.  Squeezed between two shores, danger around him, he made his response to destruction and savagery: art that overflows the personal, surprising even the artist; art that is transcendent.

Doing a little research, I discovered the work is more directly related to the war than obvious on first glance. The figure of Icarus carries forth an effigy, a memory of an earlier Icarus that Matisse created in June 1943 for the monographic issue of the revue Verve (published after Liberation in 1945).   One feels, instinctively, that this early image is more ominous. The falling body, which is blank or “blanc” – white or negative space – is set against a somber black banner.   Huge yellow starbursts encircle him and compete with the body in its limited space. The biggest difference to the later version is the dead center red starburst on the body’s chest.

As the poet Louis Aragon writes in Verve, Icarus has underlying tragic content. From conversations with Matisse, Aragon testifies that Matisse had intended to bring Icarus down to earth and align his myth with the tragedy of a soldier in World War II. The stars are bursting weaponry shells (eclatements d’obus) and the white figure is a bloodied corpse.   I’d always interpreted the small red dot in the more familiar Icarus as the radiating, beating heart, which carries passion and wound. I never realized how prominent the wound was.

After finishing this version, Matisse immediately began working on Jazz in 1943. In addition to the hideous chaos of the war, Matisse had personal burdens.  His wife, daughter Marguerite and her husband had been arrested by the gestapo. Matisse’s son was fighting with the Resistance while Matisse recovered from a stomach operation that left him in convalence (though in beautiful Vence).

Matisse’s work on Jazz in the years of ’43 and ’44 – “cutting into living color” – working with his “chromatic and rhythmic improvisations.”  Not blind, not deluded with his head in the clouds, but gathering courage and verve itself.

The expression, as the deeper image of Icarus tells us, is full of the paradoxes of life and death, dreams and nothingness, acting and being conquered. The artist, perhaps, prevails in the later image as one who scales the heavens at risk of falling into the abyss. The image of the shattered soldier is not far away. Together, it’s a slap in the face to skeptics who don’t understand art and ask: “Why bother with your art? Why bother, when the world is falling apart, with poetry?” 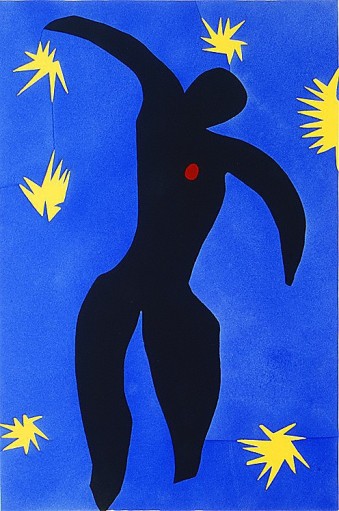 The later Icarus, from Jazz

This entry was posted in Uncategorized and tagged cut-outs, Icarus, Matisse, Normandy. Bookmark the permalink.