In/Out or the In-ness of “Suits” 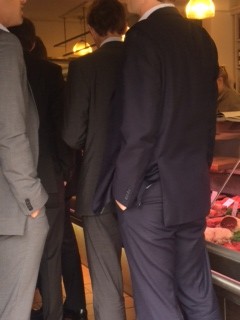 The notion of who’s in, who’s out is infinitely complex and shifting notion of human dynamics, never clear on the surface. It’s a city of upstarts and gotten theres.   A charming agent, with whom I shared a meze of fish and olives, said he never meets writers cold; I’d jumped that hurdle only due to an introduction from an old friend.

On the trail of agents, I pushed my way into a locked building, followed a “suit” who was buzzed in. (The agent, no doubt at lunch, didn’t answer the buzz. I delivered my envelope and left.) I also snuck into a private garden. What would you do if saw the gate ajar to a perfect garden, protected from view by wide falling boughs? One lovely mother was surrounded by her three children, dressed in pressed baby blue shorts, the girls in pinafores. I got locked in, oddly enough, and also managed got out. I made a habit of getting into odd places in London.

Being in/being out – it’s an ongoing story. As a writer, it’s hard to break “in.” Once you’re in, how “in” can you get? If you’re too “in,” do you lose your edge? Writers unsuccessful at getting “in” can claim moral superiority of being out. It is true that art needs to come from a place of out, standing outside society, outside yourself.   There’s nothing self-righteous about it. What matters is the art.