Politics, Birth and other Cataclysms

Posted on November 12, 2015 by jillbpearlman 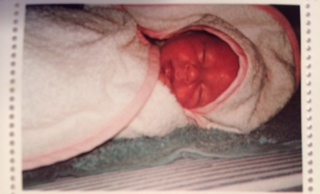 The doctors wanted me to rest in the hospital for weeks, but I knew the baby would be coming soon. I wasn’t thinking, Will we ever get along in this world? I wasn’t thinking at all. I was very busy feeling. I wasn’t feeling serene and peaceful. I was feeling something like: Wow, this is an amazing world, splitting apart to give birth to another human, like a cataclysm, and everybody walks around acting like it’s normal.

So from my hospital bed I watched all about Yitzhak Rabin’s murder and the search for his killers. A Jewish radical, not an Arab! What would it mean? Was it the end for a chance for peace?

When I pressed the button on the remote, and found myself alone in the hospital room, I reached on my bedstand and pulled out “Crime and Punishment.” My heart raced along with Raskolnikov’s emotional trials. I sped through some of Dostoevsky’s longer passages, thumping and sighing about disasters and more disasters, thinking deep down – God, I could have a disaster too, that’s what the world is made of. And I returned to the text, giving myself over to them.

When I put that book down, I moved on to the Paris city workers who decided it was time to stop working and start protesting – the city ground to a halt in the infamous Nov. ’95 shutdown.

Even when the time came to deliver, the French anesthesiologist decided to distract me from the fact that there was no time for an epidural. He and I dug deep into the Appalachian truths of the Deer Hunter, filmed near my hometown, Pittsburgh.

Funny how easily the little thing slipped out. She was so small and delicate, with a little rosebud mouth. It was hardly a labor – fifteen minutes. From the ashes of destruction and elucidations of crime came — someone so unlike them!

After the metros shut down, making it nearly impossible for me to deliver milk to the preemie ward, the nurses went on strike. It didn’t matter. Rachel instantly changed the story. Suddenly it was her story and she ran with it, as she’s been doing it beautifully for the past twenty years.

3 Responses to Politics, Birth and other Cataclysms