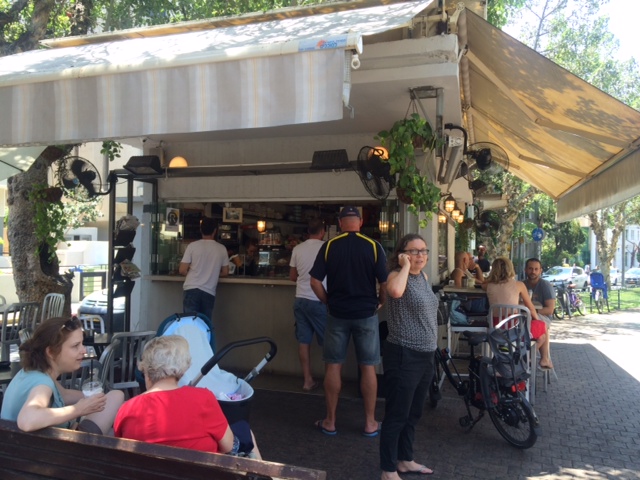 Another steamy day in Tel Aviv. It’s hot, close to 90. The construction crews are out with their vats of concrete. They’re throwing ropes from the roofs of the Bauhaus buildings, previously white, now half of them patchy, gray.   People are whisking by in all kinds of contrivances – rented bikes, automatic scooters, small cars, smooth clean buses. Neve Tzedek, the first area of the city established when Jews moved out of Jaffa, now looks like a village in the quieter parts of Cote d’Azur, with its low whitewashed buildings and bougainvillea. Early fathers wanted to create a garden city all over – to make a city of one-story buildings clustered around inner courtyards of abundant green. Those palm, mimosa, plane trees, grown tall and leafy, mark how much the city has grown.

The growing pains are only too obvious. There is urban decay and skyrocketing real estate prices fueled by the very wealthy, both native and foreign.   Tel Aviv has a cosmopolitan spirit that rebels against the politics and mores of religious conservatives. They meet religion with ham – once barely seen, ham is on the hottest menus, along with shrimp, squid, serrano, the whole gamut of tref that makes the religious fear they’ve gone to hell. Not to mention that it’s a premier gay capital, certainly the capital of the Middle East.

Tel Aviv is a vibrant urban space, a place of immigrants inhabited by an adaptable chill people. They worry once they get there. What’s the point in worrying before? It will happen as it does. People are direct, unguarded, social and anti-social – a queue is provocation to push.   This week they became targets, for the first time, of missiles with enough staying power to span the forty mile distance from Gaza.   Missiles are popping the bubble of the world of their own making.

Each person approaches it differently. A woman with a shaved head and beautiful green eyes told me she used to be a sergeant in the Air Force. Her charge was intercepting enemy missiles.   She has kids four and six who break their soccer game to run into a bomb shelter.   She shrugs with an open smile. “Hamas is doing it because they have to.   They need to get their own country. Until then… I understand. They’re showing off. Once they get their country, it will quiet down. When they’re happy, we’ll be happy.”

“You don’t need to order Israeli wine,” said a waitress. “We’re mad at the government.” A potter in a cooperative said, “I was horrified at the killing of the Palestinian boy. It made me ashamed to be Israeli. We’re tired. We just want to get to work and get home, play games with our children, watch a little tv, enjoy some food.”

The everydayness of her desires is what links people on all sides, which is almost too obvious to say. The solution itself is less obvious, but the silence needs to overwhelm the fanatics. Quiet has to be louder and louder until it’s the only thing heard. In his famous poem “Wildpeace,” Yehudi Amichai writes, “Let it come/ like wildflowers, suddenly,/because the field/ must have it: wildpeace.”  Amen.

This entry was posted in Uncategorized and tagged #Gaza, #Israel, silence, Tel Aviv. Bookmark the permalink.