Beam me up, Tavener! 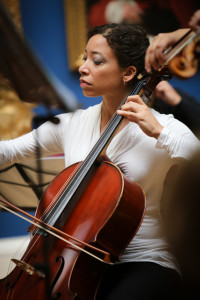 This week I watched Community MusicWorks in rehearsal as the orchestra welcomed and was perplexed by its new strange piece – “The Protective Veil” by contemporary British composer John Tavener. Its form is so unusual that it was hard for the musicians to wrap theirs head around. They were happily astonished at the shimmering sound world, yet no one could say exactly what it was. It surges with translucent and gathering energy, it is both centering and passionate, and from there, it’s you and your emotions.  If I ever wanted to see how open-ended art can have wildly different interpretations, and simultaneously serve as a meeting place, a space of emotion and sublimity, this was it.

As a rich chord was hovering, a violinist offered an image to his sixteen colleagues: “Remember that beam in Star Trek?” Another violinist said, after creating a warm placid surface with myriad reflections, “I feel like I’ve just come from a Zen retreat.” They took a break: when the three giant basses began to refind their A, it sounded like they were tuning thunder.

Adrienne Taylor, the talented cellist who chose and arranged the work for Community MusicWorks, and is performing the solo part, said, wisely, she felt a wooshing back and forth in time, from the center of an inspiration to a point of measured perspective. She may have been talking about the creative process itself – being in the ecstasy of inspiration, then having the cooler mind to order and shape art.

The composer, it so happens, had something rather different, and specific, in mind. Tavener worked with a story from the Eastern Orthodox Church, the apparition of Mary in the form of a veil that hovered and protected the city of Constantinople during a period of siege. It dates from the 10th century.  Tavener, who converted to Russian Orthodoxy, wrote this eight-part piece to reflect the life of Mother of God in her compassion, joy, sorrow, ultimately a kind of ever-thereness.

One astute violinist piped up with these suggestions in his interpretation.  “It’s as if the chord has always been in existence, but it just becomes known to us.” It was a beautiful way to talk about an invisible presence that becomes perceptible in a community that is making art.