WHAT WOULD BAUDELAIRE DO? 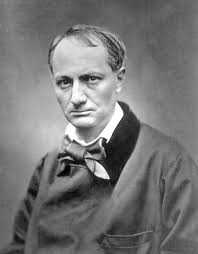 I know, poets are said to have beautiful words but no practical action. Still, I began to wonder what Baudelaire, French poet par excellence, bad boy and scowling melancholic, would say about France and its current crisis of post-attack polarization.

I started thinking last week because Clio, my alter ego of last week’s post and my novel, is a fan of Baudelaire. Clio – and I – got swept up in the shock and horror after the terror attacks. Knowing that several conflicting opinions may be true at the same time, and trying to sort it out was simply overwhelming.   The mess, the flux loomed.  But art is a space that can investigate flux, make forms that help us think, and maybe, just maybe come to a pause, a resting point, a caesura.

Baudelaire wrote many poems but thinking through “Hymn to Beauty” is especially stimulating. The poet begins by bringing his logic to the divinity he calls Beauty.  Baudelaire thinks in polar opposites, and it confuses him: how can you be so gorgeous and so cruel at the same time? So dazzling and heartless? He’s thinking like a Catholic (Do you come from heaven or from Hell?) and like a Cartesian.   His skeptical “I” demands answers, feels inadequate, feels entitled to know. He’s left talking to himself.

Little by little, he’s moved by emotion, by insight. He experiences beauty not as an outside object but as something he brings into himself – and his understanding of the world changes. Whether Beauty comes from Heaven or Hell, he no longer cares. The poet is intensely alive to the universe. It has softened, as he is part of it and it part of him.

The contrarian lets go of his questions as he brings forward his whole being, both intellect and emotions.  “Resolution…[is] about putting a brake on the linear drive towards answers, staying with and dropping into deep feeling and experience of questions as they are – in their wide openness,” the critic Claire Chi-ah Lyu writes.

It is not a world of enemies.  He no longer tries to master or control.  What was fixed in him becomes supple and humane.  What does it matter, he asks, if she makes, “The universe less hideous and the instants less heavy?”

Seeing this reality in the mirror should make all Cartesians quake.

5 Responses to WHAT WOULD BAUDELAIRE DO?