The Wreckage in Jerusalem

Posted on November 19, 2014 by jillbpearlman 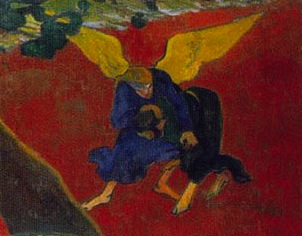 Detail from Paul Gauguin’s “The Vision after the Sermon”

I’m trying understand the complexity of mourning after the synagogue massacre in Haf Nor, Jerusalem.   The attack was like a bomb packed with nails thrown into a multitude of communities. It seemed designed for maximum destruction, to ruin everything from prospects for peace, to wavering trust of Jews to Arabs, the attackers’ own communities to recognition of individuals to respect for The Book that three religions cherish. It was designed to destroy trust among common people. If the reports that one of the terrorists worked in the synagogue and/or one in the shop next door are true, how can anyone trust his or her neighbor, take as authentic the everyday exchanges of quotidian life that in Jerusalem supports the idea that regular people want peace. Extremists have a way of stealing the show, of upending the dialog. Peace takes years to make, and takes minutes to destroy.

Such giant, monstrous gestures gag us, make us victims of ideologies we neither want nor believe in. There is helplessness at being limited, reduced, restricted to an either-or of our violently polarized times. As Bradley Burston wrote in Haaretz, the left-leaning Israeli newspaper, “Thanks to the maniacal designs of extremists… We have become the hostages, the pawns, the targets of extremists, demagogues, the exploiters of misfortune and petty politicians who pass for our leaders.” There is widespread frustration at our being left with a script that is based on our country, class, profession and Facebook affiliation. The attack made me suffer from the hacking away at civility and humanity.

We need to write a different end to this story.   The current story looks like clash and annihiliation, a terrible horrific conflict that requires constant defense. We get it – evil exists.  It does.  We don’t want Walter Benjamin’s dark angel of history to be right. We can write ourselves into the script, in the white space between the black lettering. The white space echoes with the associations of words, but it is still blank. That’s our space. Write in the in-between.

One Response to The Wreckage in Jerusalem