In Search of the Real Scapegoat

Posted on August 4, 2014 by jillbpearlman 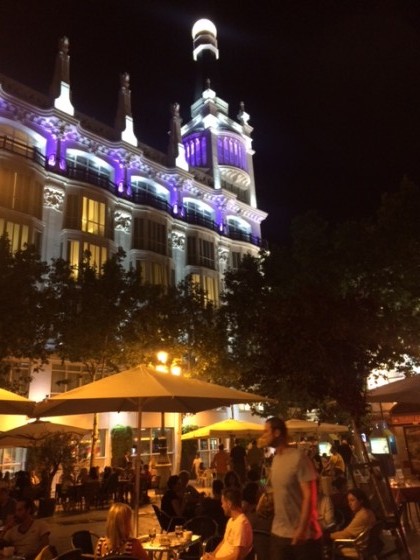 In Madrid, we are staying on the beautiful Plaza Santa Ana.  It’s an old working class neighborhood with vestiges of traditional bars, azulejos tiles on exterior walls, a theater trying to escape demolition.  On the west side of the square is an elaborate modernist white facade bathed in violet light at night, the elegant Hotel Victoria.  In the high season of bullfighting in Madrid, famous bullfighters prep emotionally and sartorially, in the hotel.  They adorn themselves in their skin-tight costumes and emerge in full extravagant display for fans who line up to shake their hands and wish them good luck.  Then they depart for ritual fight at the arena in Plaza de las Ventas.

In this summer of slaughter, I began to think about scapegoats.  On the one hand, there is the symbolic and emblematic, be it bull or goat.   The ritual is acted out in the staged arena or in the desert.  On the other, we have the sliver of holy land that is being fought over and blackened.  Jews have long been the world’s scapegoats.  Even as anti-Semitism is spiking for reasons both tied to politics and tied to atavistic latent hatred, others are vying for the honor of the world’s scapegoats – Palestinians, Russians, blacks.

Unlike pampering and feeding animals to satisfy the human need to kill, humans are slaughtering humans.  The killing need is lamentable and seemingly unquenchable, and the world theater uncontrolled, out of bonds, terrifyingly real.  In ancient times Jews put their sins on the head of a goat, Azazel, and sent it into the wilderness, never to be seen again.  The sins of the nation was atoned for.  On Yom Kippur, Jews now do it symbolically.  If only humans could be satisfied by driving out a goat, carrying on its back our endless, grievous sins, and get on, somewhat lightened, with the task of living.