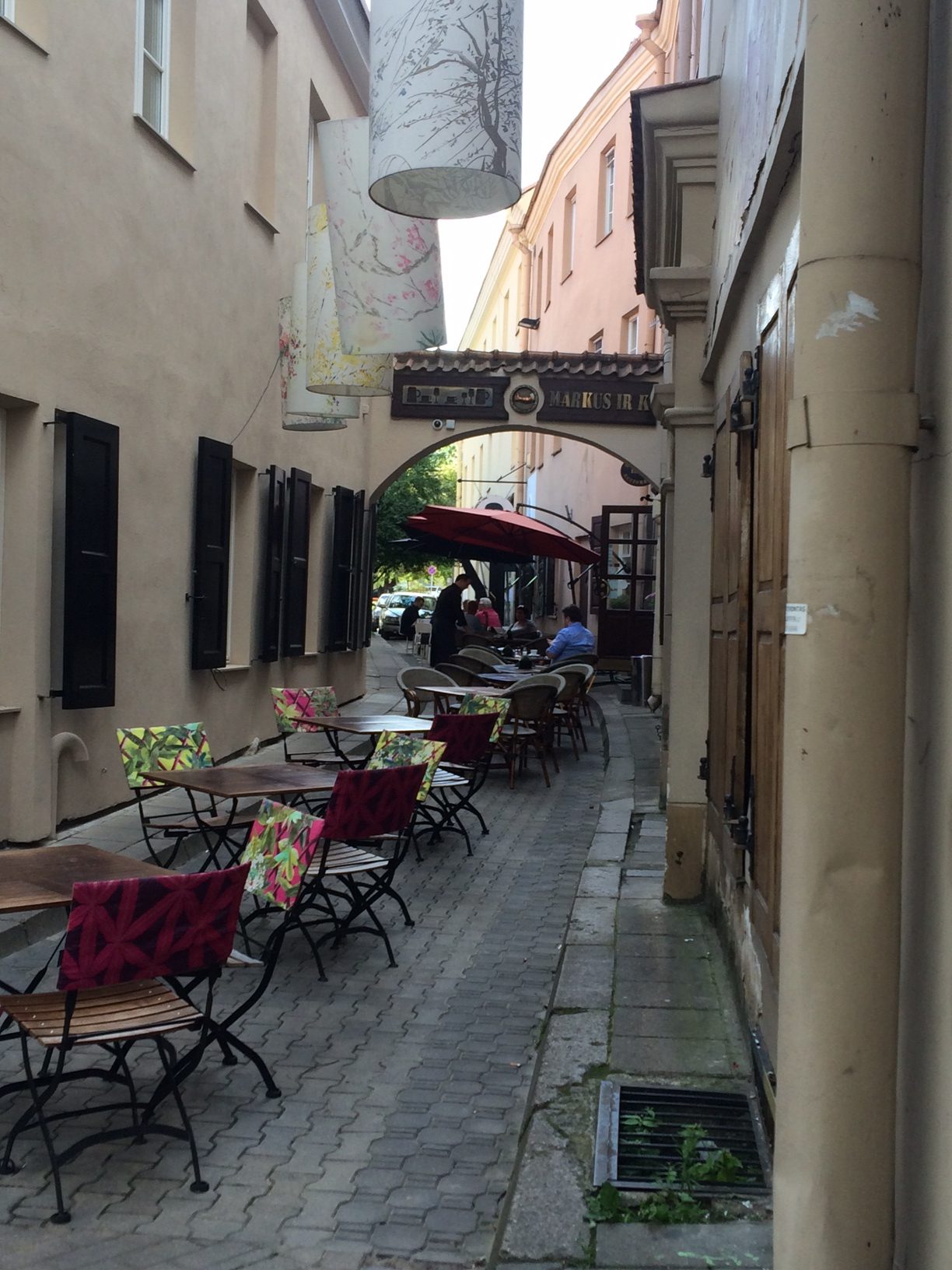 In Vilnius, the ground shakes with contradictions for people who feels history through place.  Place itself doesn’t change, and the buildings may or may not change.  Only the tenants change.  In old city, the tenants have gone from Jewish families to emptiness to Soviet bureaucrats.   With the departure of the Soviets, the place went to Lithuanians who would never have set foot in these ghettos before the War, to new families, to small entrepreneurs who reinvented charm in the small and picturesque streets.

The streets are marked with plaques to indicate that here was the so-called small ghetto, here the large ghetto.  In the ghetto, once there was a former study house, now an Italian bistro.  Once it was a place that imprisoned the weak and infirm, now it is a place of the fit and energetic.  The tourists who come to Vilnius are intelligent travelers who appreciate the medieval inner city that hasn’t been opportunistically overdeveloped.  They come to eat and wander and visit a graceful university complex, one of the oldest in Europe.  They admire Vilnius’ Italianate buildings, its wedding cake pink churches, its bridges and cobblestones and all that we love about old country.

All that we hate about the old country – its indigestible history.  It’s hard to keep the Holocaust from blotting out the entire experience. It’s been hard not to create and recreate it in my imagination – an imagination which translates into step and vision.  As I walk, I feel the city and life that was lived here, both sophisticated and spiritual.  It was a city where Jews lived in misery, eking out living by selling on the streets; others had the relatively well-off lives of professionals not so different from their counterparts in American cities.  Looking at the photographs in the museum, I lingered on the pictures of girls, noticing that the haircuts were the same as my mother’s with a barrette on the side.  Although she lived on the other side of the ocean, I recognized the little cotton dress, the conscientious though innocent expressions, black and white photography at the same technical level.  I recognized young men with the same penetrating, shy, shiny black eyes as my father’s (so that was the Lithuanian trait.  I always imagined we might have been Italian or Spanish!), the same lanky, long-limbed, “introverts.”

Then there were pictures of two sisters holding hands.  Pictures of children forcefully separated from their parents and sent to Auschwitz and Treblinka; parents who resisted were shot on the spot.

It was a powerful experience not yet digested.